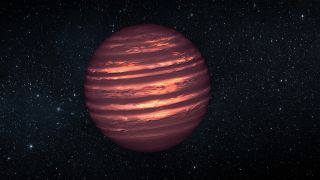 An artist's impression of a brown dwarf.
(Image: © NASA/JPL-Caltech)

Brown dwarfs, or failed stars that resemble rogue planets, are far more abundant than astronomers previously thought. A whopping 100 billion of the small, dim celestial bodies could be lurking throughout the Milky Way, new research suggests.

Like most stars, brown dwarfs form when clouds of interstellar gas and dust collapse under their own gravity. In main-sequence stars, the heat and pressure ignite the core through nuclear fusion. But some aspiring stars never reach that point: instead, they enter a stable state before fusion can begin. Without fusion, these failed stars don't emit much light, and they can be difficult for astronomers to observe. A new study attempts to tally up how many brown dwarfs are hiding in the Milky Way, revealing a number that is much higher than expected.

Previous studies determined that there are about six stars for every brown dwarf in our cosmic neighborhood. Those studies only looked at brown dwarfs within a range of about 1,500 light-years from Earth, where such faint and tiny objects are easier to spot. However, the entire Milky Way spans a much greater distance of about 100,000 light-years, and it turns out that our neck of the woods isn't exactly representative of the entire galaxy. [Brown Dwarf Photos: Failed Stars and Stellar Misfits Revealed]

Using deep-space observations by the European Southern Observatory's Very Large Telescope in northern Chile, an international team of astronomers surveyed star clusters in the Milky Way to determine just how common these stealthy objects really are. The team, led by Koraljka Muzic from the University of Lisbon in Portugal and Aleks Scholz from the University of St Andrews in Scotland, began hunting for brown dwarfs in nearby star-forming regions in 2006.

While they were conducting their Substellar Objects in Nearby Young Clusters (SONYC) survey, the researchers discovered that the star cluster NGC 1333 contained an unusually high number of brown dwarfs. Rather than 1 brown dwarf for every 6 stars, there are about half as many brown dwarfs as there are stars in this star cluster — three times the previous estimate.

At first, they weren't sure if NGC 1333 was just a bizarre brown-dwarf hotspot, or if this observation had bigger implications. So the researchers expanded their brown-dwarf survey to look at a bigger chunk of the Milky Way. They then turned their telescope toward another star cluster named RCW 38, which lies 5,500 light-years away in the constellation Vela. Not only is this cluster about five times farther away from Earth than the previously surveyed regions, but it's also more densely populated with bigger and brighter stars.

In order to detect the brown dwarfs in RCW 38, the researchers used a special adaptive optics camera on the European Southern Observatory's Very Large Telescope called NACO. This instrument combines two technologies: the Nasmyth Adaptive Optics System (NAOS), which counteracts distortion caused by turbulence in Earth's atmosphere, and the Near-Infrared Imager and Spectrograph (CONICA), an infrared camera and spectrometer. Because brown dwarfs emit red and infrared light, these technologies allowed researchers to see the distant, dim and tiny objects hiding among a crowd of large and brilliant stars.

Again, the researchers counted about half as many brown dwarfs as actual stars in RCW 38. "This is in agreement with the values found in other young star-forming regions, leaving no evidence for environmental differences in the efficiency of the production of [brown dwarfs] and very-low mass stars possibly caused by high stellar densities or a presence of numerous massive stars," the study's authors wrote in a research paper, which was published online in the Monthly Notices of the Royal Astronomical Society.

"We've found a lot of brown dwarfs in these clusters. And whatever the cluster type, the brown dwarfs are really common," Scholz said in a statement. "Brown dwarfs form alongside stars in clusters, so our work suggests there are a huge number of brown dwarfs out there."

Scholz will present the new findings at the National Astronomy Meeting in Hull, England, on Thursday (July 6).