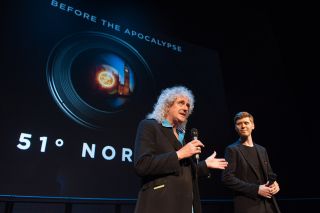 Astrophysicist and Queen guitarist Brian May (left) and filmmaker Grigorij Richters are two of the founders of Asteroid Day.
(Image: © Max Alexander)

Tomorrow (June 30), astronauts, celebrities and planetary protection researchers from around the world will come together in Luxembourg for a 24-hour webcast to celebrate Asteroid Day, and you can watch the action right here on Space.com.

The 24-hour broadcast will feature discussions on a variety of asteroid-related subjects, including the impact undiscovered asteroids can have on the Earth, how scientists spot new asteroids, and the importance of current asteroid missions like NASA's OSIRIS-REx and the Japanese Space Agency (JAXA)'s Hayabusa-2.

Dust and rocks shed from asteroids constantly bombard Earth. While most of the debris attracts little attention, sometimes it can have significant consequences, as was the case in 2013 when the Chelyabinsk meteor erupted in the sky over Russia, damaging buildings and injuring bystanders. International Asteroid Day was established in 2015 to help the public better understand the potential threat asteroids can pose. [5 Reasons to Care About Asteroids]

"The more we learn about asteroid impacts, the clearer it became that the human race has been living on borrowed time," Brian May, an astrophysicist and a guitarist for the rock band Queen, said on the Asteroid Day website. May co-founded Asteroid Day with Danica Remy and Apollo 9 astronaut Rusty Schweickart, who are both leaders of the nonprofit group B612 that encourages the early detection of asteroids, and film director Grigorij Richters.

Working with other astronauts and researchers, the four also helped develop the 100X Declaration, which calls for increasing the asteroid discovery rate by a factor of 100 over a decade.

"Asteroid Day and the 100X Declaration are ways for the public to contribute to an awareness of the Earth's vulnerability and the realization that asteroids hit Earth all the time," May said. "Asteroid Day would [be] the vehicle to garner public support to increase our knowledge of when asteroids might strike and how we can protect ourselves."

The broadcast will kick off with a review of NASA's OSIRIS-Rex asteroid sample-return mission, followed by a segment about JAXA's Hayabusa-2 mission, which will also bring a piece of an asteroid back to Earth. A science fiction movie written and directed by Richters called "51 Degrees North," about an asteroid impact on London, will begin at midnight EDT (0400 GMT).

"Man vs. Asteroid," a documentary that features May and renowned physicist Stephen Hawking, will be broadcast at 3 a.m. EDT on June 30 (0700 GMT). It will be followed by "Scientists Rock," a seven-part video series narrated by astrophysicist and science communicator Neil deGrasse Tyson.

The all-day broadcast will also include live panels from NASA and the European Space Agency on how the agencies discover and track asteroids, and how they plan for planetary defense.

"At NASA, every day is an asteroid day, but we value the international collaboration for a designated day to call attention to the importance of detecting and tracking hazardous asteroids," Lindley Johnson, NASA's planetary defense officer, said in a statement from the agency.

At 6 a.m. EDT (1000 GMT), the Asteroid Day committee will begin broadcasting its 6-hour conference, which will include multiple panels. [The full schedule is available here.] Researchers will discuss ongoing asteroid research, the history of Asteroid Day, and the history and origin of asteroids. A panel of astronauts will talk about why space explorers love asteroids.

Several panels will examine concerns about potential asteroid collisions with Earth, including the role of governments, space agencies and private industries in planetary protection. The meeting will conclude with a conversation on asteroids as resources for both space exploration and profit.