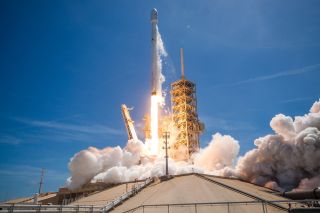 This Sunday (July 2), SpaceX is scheduled to launch its third Falcon 9 rocket in just under 10 days, following launches on June 23 and 25.

The Falcon 9 is scheduled to take off from Launch Complex 39A at NASA's Kennedy Space Center in Florida carrying Intelsat 35e, a broadband communications satellite. Spaceflight Now reports that the launch window will open at 7:36 p.m. EDT (2336 GMT).

SpaceX confirmed that a second launch window will open on Monday (July 3), if Sunday's launch is delayed.

SpaceX representatives have said that the company has a backlog of more than 70 missions, worth more than $10 billion.

Editor's Note: This article previously stated that Launch Complex 39A is part of Cape Canaveral Air Force Station; it is part of NASA's Kennedy Space Center.