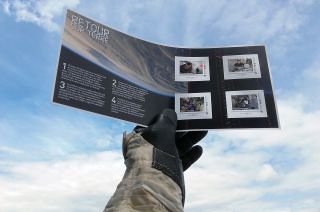 On the same day he returned to Earth from the space station, Thomas Pesquet also landed on four new French postage stamps.

La Poste, France's postal service, timed the release of the "Retour sur Terre" ("Return to Earth") commemorative setto coincide with Pesquet's touchdown on Russia's Soyuz MS-03 spacecraft on June 2 after 196 days in space. A member of the European Space Agency's astronaut corps, Pesquet is France's tenth citizen to orbit Earth and the country's third crewmember to live on the International Space Station.

The letter-rate (lettre verte, or "green letter") stamps, which sell as a set of four for 4.60 euros (about $5.15 U.S.), each reproduce a photo taken of Pesquet during his six and a half months on the space station.

Two of the stamps show Pesquet wearing the extravehicular mobility unit spacesuit that he wore for two spacewalks with Expedition 50 commander Shane Kimbrough to connect a new set of batteries on the exterior of the space station and to prepare one of the outpost's ports for the installation of a docking adapter to support commercial crew spacecraft.

The blue, white and red of France's flag can clearly be seen decorating his spacesuit's left shoulder in both photos taken in January and March 2017. The first image was captured while Pesquet was still inside the station's Quest airlock, his face visible inside his helmet. The second shows Pesquet's selfie taken outside the orbiting outpost, his visor reflecting his outstretched arm holding the camera.

The set's other two stamps depict scenes inside the space station. One uses a December 2016 photograph of Pesquet conducting science while floating in the European Columbus module. [Postcards from Space: Astronaut Thomas Pesquet's Amazing Photos]

"Here I am using a 'tonometer' to measure my arteries while a patch is recording my temperature to monitor my sleeping patterns," Pesquet wrote, describing the French experiment EveryWear. "I am the first astronaut to test the application."

The fourth stamp shows Pesquet affixing his Expedition 51 patch to the Russian Sokol pressure suit he wore to launch to and land from the space station.

"We are getting the Sokol suits ready for our return to Earth soon, and having the right patches is very important," wrote Pesquet in late April 2017. "We don't really sew the patches into our suits, that would make holes and sharp needles are to be avoided on the space station. Instead, the patch and the suit have loops that we thread through with string and a blunt needle, tying a knot at the end."

The four self-adhesive stamps come within a full-color folder that uses photographs of the space station over the planet and Earth as seen from aboard the complex as backdrops. Brief captions (in French) are printed opposite the stamps.

Selected as an ESA astronaut in 2009, Pesquet's landing on June 2 marked the end of his first spaceflight. His 196 days off the planet ranks him second among his country's space explorers for time in orbit. He trails former astronaut Jean-Pierre Haigneré by 13 days.