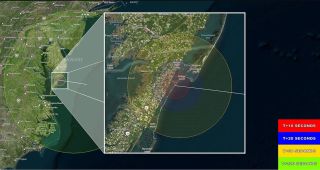 Artificial clouds should be visible shortly after 9 p.m. EDT on June 11 from New York to North Carolina if a NASA sounding rocket launches on time from the agency's Wallops Flight Facility in Virginia.
(Image: © NASA)

Update for June 15: NASA's next attempt to launch a small sounding rocket to create glowing clouds in the night sky will occur no earlier than Saturday night (June 17). Liftoff from NASA's Wallops Flight Facility from Wallops Island, Virginia is scheduled for some time between 9:05 p.m. EDT and 9:20 p.m. EDT (0105-0120 GMT).

Original story: A small NASA rocket will launch to create colorful artificial clouds on Sunday night (June 11), and you can watch all the action live. Weather permitting, the launch could be visible to spectators on the U.S. East Coast from New York to North Carolina, NASA officials said.

You can also follow the flight on the Wallops Ustream site: http://www.ustream.tv/channel/nasa-tv-wallops.

About 5 minutes after liftoff, the rocket will deploy 10 soft-drink-size canisters, which will release barium, strontium and cupric-oxide vapor to form blue-green and red artificial clouds.

"These clouds, or vapor tracers, allow scientists on the ground to visually track particle motions in space," NASA officials wrote in a mission update. "The clouds may be visible along the mid-Atlantic coastline from New York to North Carolina."

If you live near the Wallops Island area in Virginia and would like to watch the sounding rocket launch in person, NASA's Wallops Flight Facility Visitors Center will open to the public at 8 p.m. EDT. Because the launch is weather dependent, local spectactors and online viewers can receive the latest updates from NASA via the Wallops center Facebook and Twitter sites.

The mission is designed to test a new multicanister ejection system that should allow researchers to gather data over a wider area than has been possible, agency officials added.

The rocket's total flight time will be about 8 minutes. The mission's main payload will hit the Atlantic Ocean about 90 miles (145 kilometers) off the Virginia coast and will not be recovered, NASA officials said.

The mission was originally supposed to lift off late last month, but it has been delayed several times by weather and once by a boat straying into the launch zone.

Editor's note: If you capture an amazing image of the sounding rocket launch or the colorful artificial clouds that you would like to share with Space.com and its news partners for a story or photo gallery, send photos and comments to: spacephotos@space.com.