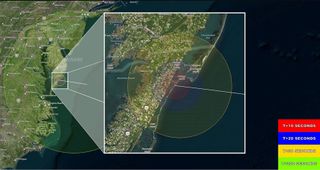 Artificial clouds should be visible June 1 very early in the morning over the mid-Atlantic coast, from New York to North Carolina and as far west as Charlottesville, Virginia.
(Image: © NASA)

NASA intends to launch a sounding rocket from its Wallops Island Flight Facility in Virginia, currently planned for very early Thursday morning (June 1). If all goes according to schedule, many residents in the middle Atlantic and Northeast United States will be able to spot multicolored patches of light in the dark, early-morning sky sky.

These conspicuous glows will be human-made features: clouds of barium, strontium and cupric-oxide vapor released by a two-stage Terrier-Improved Malemute sounding rocket.

The launch was rescheduled from May 31 due to weather, so the first opportunity will come on Thursday, June 1, at 4:25 a.m. EDT (0825 GMT). The rocket will be launched on an east-southeast trajectory. About 4 to 5 1/2 minutes after the launch, on the rocket's downward leg, as many as 10 clouds will be created from canisters, each about the size of a soft drink can. These canisters will be deployed in the air, 6 to 12 miles (9.7 to 19 kilometers) away from the 670-lb. (300 kilograms) main payload over the Atlantic Ocean, at altitudes of between 96 and 124 miles (154 to 193 km). [Blastoff! How to See a Rocket Launch in Person This Summer]

"The development of the multicanister or ampule ejection system will allow scientists to gather information over a much larger area than previously allowed when deploying the vapor just from the main payload," NASA officials wrote in a statement.

According to NASA, the total flight time for the mission will be 8 minutes. "The payload will land in the Atlantic Ocean about 90 miles [145 km] from Wallops Island and will not be recovered," NASA officials wrote. "The tracer clouds pose absolutely no hazard to residents along the mid-Atlantic coast."

Tracers used to study the ionosphere

Since the 1950s, sounding rockets have been periodically sent up into the atmosphere to study high-level winds and the Earth's magnetic field. Because these fields are invisible to the eye, NASA uses tracer elements such as barium to make their movement visible. When ground-level observers and cameras are in darkness, before sunrise or after sunset, barium is released into the higher levels of the atmosphere — where the sun is still shining.

The resulting luminescence is caused by scattered sunlight interacting at both the visible and infrared parts of the spectrum, they added.

Based on many other similar experiments, when first released, the clouds may seem explode into view, sometimes blooming so rapidly they resemble fuzzy fireworks. Depending on the state of the atmosphere, the clouds may appear to expand to several times the apparent size of the moon; in other situations, they may appear to elongate in a north-south fashion or stretch out into long plumes. Initially, they may appear to glow with prismatic colors, although the primary colors are expected to trend toward bluish-green and purple-red.

"Since observers must be in darkness while the barium cloud is in sunlight, the technique is limited to local-time observations near sunrise," NASA officials said.

As a result, the Terrier-Improved Malemute rocket has a 17-minute launch window beginning at 4:25 a.m. EDT. During that time, it will be about 75 minutes before local sunrise, but the sun's rays will still be coming in from the west to light the clouds at their high altitudes.

Depending on atmospheric conditions, the clouds could persist for as little as 2 minutes or as long as 20 minutes before fading completely away. Of course, the sudden and unexpected appearance of several multicolored clouds in the early morning sky might alarm unsuspecting people and lead to a rash of UFO reports.

When will the rocket be launched?

The morning on which the launch will be attempted depends on weather conditions at the launch site, NASA said.

"Ground cameras will be stationed at Wallops and in Duck, North Carolina, to view the vapor tracers," NASA officials wrote in an update. "Clear skies are preferred, but not required, at both sites for the launch to occur."

Live coverage of the launch is available here on Space.com, courtesy of NASA Wallops, as well as directly via UStream beginning at 3:45 a.m. on launch day.

The status also can be followed on launch day on Twitter via @NASA_Wallops and on Facebook here.

If you have a smartphone, you can use NASA's What's Up at Wallops app to follow the launch. The app (for iOS or Android) includes launch information and a compass showing the precise direction for viewing.

Where to look for the colored clouds

Remember that the clouds will begin to appear 4 to 5 1/2 minutes after the rocket leaves the launch pad at Wallops Island. If you live in the eastern U.S., direct your attention toward the waters just offshore from Wallops.

For central New York, central Pennsylvania, Delaware and much of Maryland, face southeast.

As to where in the sky to look, the closer you are to Wallops Island, the higher the clouds will appear. Keep in mind that your clenched fist held at arm's length is roughly equal to 10 degrees.

At a distance of 250 miles (400 km) from Wallops, the highest of the clouds will appear 30 degrees high.

And for the launch itself

The launch of the Terrier-Improved Malemute rocket might be glimpsed from distances of up to several hundred miles from the Wallops Island launch site, NASA officials said. The NASA Visitor Center at Wallops will be open at 3:30 a.m. for viewing the launch. For more details, see: http://www.nasa.gov/centers/wallops/events/viewing_launches.html

Joe Rao serves as an instructor and guest lecturer at New York's Hayden Planetarium. He writes about astronomy for Natural History magazine, the Farmers' Almanac and other publications, and he is also an on-camera meteorologist for Verizon Fios1 News, based in Rye Brook, New York. Follow us @Spacedotcom, Facebook and Google+. Original article on Space.com.