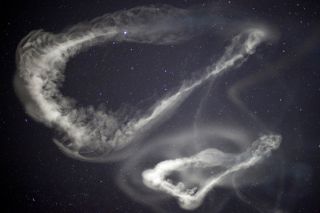 Two of the clouds left in the wake of the ATREX experiment shine on March 27, 2012. The rockets released trimethyl aluminum, a substance that burns spontaneously in the presence of oxygen.
(Image: © NASA/Wallops Flight Facility)

NASA will launch a rocket tonight (Jan. 29) on a mission that promises to put on a spectacular, albeit brief, light show over the U.S. East Coast that may be visible to stargazers along the Atlantic Seaboard, weather permitting.

Unsuspecting observers of the artificial night sky display may be puzzled and amazed, so before you make that phone call to your local media outlet or police station, here is why this is happening and when you might see it.

The bright phenomenon will be caused by an experiment aboard a NASA sounding rocket. As part the mission, the rocket will release a chemical tracer that should create two bright, red-colored lithium vapor trails in space that may be seen by observers across the mid-Atlantic region, and possibly from even further away.

The rocket will be fired from NASA's Wallops Island Flight Facility on Virginia's Atlantic coast. Liftoff is slated to occur as early as 5:30 p.m. EST (2230 GMT). The suborbital rocket, which can launch high above Earth but not orbit the planet, will be launched tonight to test technology for gathering science data during future projects. [NASA Rocket Launches Light Up Night Sky  (Photos)]

The launch window for tonight's NASA night light show opens at 5:30 p.m. EST and extends to 6:50 p.m. EST (2350 GMT), but the optimum target time is 5:45 p.m. EST (2245 GMT). NASA intends to photograph the resulting red luminescent trails from Wallops Island and from an aircraft as well.

You can submit any amazing photos of the launch or the resulting night sky show to SPACE.com here: spacephotos@space.com.

Should weather conditions be unfavorable, the firings will be deferred to another night. Alternate dates run from Thursday through Friday (Jan. 30 to Feb. 1).

The sounding rocket that will be used to create the two NASA-made glowing cloud trails will be a Terrier-Improved Orion.In this technology test launch, two canisters in the rocket's payload section will contain solid metal lithium rods or chips embedded in a thermite cake. The thermite is ignited and produces heat to vaporize the lithium.

Once the vapor is released in space, it can be detected and tracked optically. The rocket will eject two streams of lithium which will be illuminated at high altitudes by the sun (which will be below the local horizon at ground level).

Libby West, mission project manager with the NASA Sounding Rocket Program at Wallops, said: "This launch is a technology test flight for two upcoming missions. We will be testing two different methods for creating the lithium vapor to determine which configuration is best for observing various science phenomena in space."

During the flight, one vapor trail will occur at an altitude of about 72 miles (116 kilometers) and the second will occur at about 78 miles (126 km) up. When heated, the lithium rods change to lithium vapor and small amounts of lithium oxide. The thermite reaction produces iron and aluminum oxide. The lithium combustion process poses no threat to the public during the release in space.

A NASA map for the mission shows the trajectory of the rocket launch, as well as expanding circles indicating the visibility of the lithium vapor streaks at different times.

In the map, the blue line extending out from the launch site toward the 4 o'clock position represents the trajectory of the rocket; at the end of the blue line is where the lithium clouds will be released.  The outer yellow circle extends for a radius of approximately 400 miles (645 km), marking the boundary where the clouds will appear at a maximum altitude of 10 degrees above the horizon. This is roughly comparable to the width of your clenched fist held at arm's length.

The key to making a sighting is to have a clear, unobstructed view of the horizon in the direction of Wallops Island. For example, a viewer in Raleigh, N.C., should look toward the northeast; in New Haven, Conn., you should face southwest; in Philadelphia, Pa., it'll be toward the southeast. [Amazing Stargazer Photos for January 2013 (Gallery)]

In the table accompanying this guide, I have calculated the altitude and direction of where you should look for 15 selected cities.

If you live along the Atlantic Seaboard and live outside of the yellow circle, you should still make an attempt to try and see the lithium clouds. At an altitude of 78 miles, theoretically they might be seen as far as 850 miles (1,370 km) from the release point. Their altitude will be less than 10 degrees above the horizon, but assuming your sky is free of any cloud cover or haze and you have an unobstructed view in the direction of Wallops Island, you certainly will have a chance of getting a glimpse of this atmospheric experiment.

Viewers as far north as southern Quebec and Nova Scotia and as far south as northern Florida might be able to catch the clouds as low as five degrees above the horizon.

For places situated to the west, toward the Ohio and Tennessee River Valleys, there will be a caveat in that the sun will have only recently set and the twilight sky may still be too bright to see the artificial clouds.

Looking up along the trajectory from the ground, such chemical trails often appear distorted in complex ways. Among other things, their shape provides scientists with precise data on wind speeds and directions at various levels of the upper atmosphere. [Earth's Atmosphere from Top to Bottom (Infographic)]

The jet stream at nearly 80 miles (128 km) above the Earth's surface is much higher than the one commonly reported in weather forecasts. The winds found in this upper jet stream typically have speeds well over 300 mph (482 kph) and create rapid transport from the Earth's mid latitudes to the polar regions.

This jet stream is also located in the same region where strong electrical currents occur in the ionosphere. It is therefore a region with a lot of electrical turbulence, of the type that can adversely affect satellite and radio communications.

NASA plans to launch two more missions his year that will use the lithium trails to assist scientists in observing events in space. The first launch will blast off in April from Kwajalein Atoll in the Marshall Islands, located out in the central Pacific Ocean. The second flight will occur in June, again at the Wallops Flight Facility in Virginia.

NASA used to conduct chemical cloud experiments from Wallops Island much more frequently during the 1960s, '70s and '80s, usually in the predawn hours when most people were asleep. Chemicals such as tri-methyl aluminum, barium and tri-ethylborane were used, often creating rather exotic colors of red, green and purple.

When such launches took place during convenient evening hours they usually took people by surprise. In March 1967, when three clouds were released around 7 p.m. they were followed by countless numbers of people all along the East Coast calling newspapers and police stations, asking for explanations of the strange sightings. One man described the rocket residue as "red balls of fire."

In January 1975, a barium cloud was released at around 5:30 p.m. in the evening. As luck would have it, the town of Riverhead, N.Y., was hit by a power outage at the very same moment that the cloud appeared in the sky.

This resulted in a panic among the local residents who believed that the cloud had something to do with the loss of their power. One man called the local police station and shouted: "We’re being invaded!  I can see the spaceship in the sky right now … it's glowing with a greenish color and expanding as it's draining us of our electric power!"

Editor's note: If you snap an amazing photo of tonight's NASA rocket launch, the bright red cloud streaks, or any other night sky object, that you'd like to share for a possible story or image gallery, send photos, comments and your name and location to managing editor Tariq Malik at spacephotos@space.com.