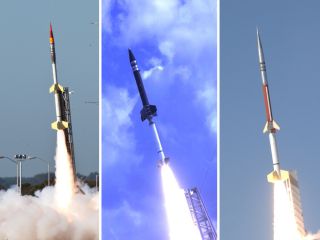 NASA's ATREX mission will launch five rockets within five minutes to help scientists study the high-altitude jet stream located 60 to 65 miles above the surface of the Earth. The rockets being used for the mission are two Terrier-Improved Orions (left), one Terrier-Oriole (center) and two Terrier-Improved Malemutes (right).
(Image: © NASA/Wallops)

NASA is gearing up to launch a fusillade of five rockets in five minutes next week on a mission to probe fast-moving winds near the edge of space.

The small suborbital rockets form the core of the Anomalous Transport Rocket Experiment (ATREX), which is scheduled to blast off from NASA's Wallops Flight Facility in Virginia on March 14, according to a mission profile. The mission will gather information about the high-altitude jet stream, which whistles along 60 to 65 miles (97 to 105 kilometers) above our planet's surface.

If all goes as planned, the five ATREX sounding rockets will launch within 320 seconds, releasing chemical tracers into the high-altitude jet stream. The tracers will then form milky white clouds, allowing scientists to track the atmospheric region's winds, which can exceed 300 mph (483 kph).

Skywatchers along the Eastern Seaboard may be able to see the action, too, if they have clear weather and unobstructed views, NASA officials said.

Observers from North Carolina to southern New York should be able to see the five rockets streak toward space. The tracers, meanwhile, may be visible for up to 20 minutes after liftoff from South Carolina through much of New England, officials added.

Earth's high-altitude jet stream blows higher up than the jet stream commonly referred to in weather forecasts. The super-fast winds in this upper jet stream facilitate rapid transport from the mid latitudes to our planet's polar regions. [Infographic: Earth's Atmosphere – Top to Bottom]

The high-altitude jet stream is located in the same atmospheric region where some strong electrical currents occur. This part of the ionosphere therefore has a lot of electrical turbulence, which can disrupt satellite and radio communications, researchers said.

While all five rockets will release chemical tracers at the edge of space, two of them will also carry instruments that measure temperature and atmospheric pressure. The rockets being used for the mission are two Terrier-Improved Malemutes, two Terrier-Improved Orions and one Terrier-Oriole.

NASA will host a news conference Wednesday (March 7) to discuss the ATREX mission. NASA will stream the teleconference live at: http://www.nasa.gov/newsaudio

The space agency will also broadcast the five ATREX launches online live, with coverage beginning two hours before the opening of the launch window. The webcast will be available here: http://sites.wff.nasa.gov/webcast