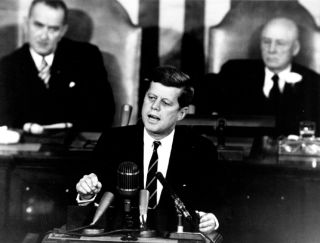 President John F. Kennedy called for an ambitious U.S. space program during a joint session of Congress on May 25, 1961, and announced the goal of landing astronauts on the moon by the end of the decade.
(Image: © NASA)

He was the American president who aimed an entire country at the moon, and for that NASA will always remember.

President John F. Kennedy, born 100 years ago today (May 29), wasn't the first U.S. president to oversee NASA, but it was he who in 1961 — amid a space race with the Soviet Union — set the country firmly on a path to the moon for the next giant leap for human spaceflight. To honor Kennedy's vision and space legacy, NASA is celebrating with a special JFK centennial website: http://www.nasa.gov/specials/jfk100/. The website features images of Kennedy's biggest moments with NASA and astronauts, as well as excerpts from "Ten Presidents and NASA" by space policy expert John Logsdon, which originally appeared in the "NASA 50th Anniversary Magazine."

"This year marks the 100th anniversary of the birth of President John F. Kennedy," NASA officials wrote on the centennial page. "Though NASA was formed by Dwight Eisenhower, President Kennedy gave the infant agency its early focus with his famous challenge to land astronauts on the moon by the end of the decade." [Photos: JFK's NASA Legacy]

The year 1961 was a transformative one for human spaceflight. On April 12 of that year, Soviet cosmonaut Yuri Gagarin became the first person to fly in space. (Alan Shepard, the first American in space, would launch just a few weeks later on May 5.)

On May 25, 1961, Kennedy issued his moon challenge to a joint session of Congress, where he called for increased funding for space exploration and clearly set the moon as a human spaceflight goal by the end of the decade.

"First, I believe that this nation should commit itself to achieving the goal, before this decade is out, of landing a man on the moon and returning him safely to the Earth," Kennedy told Congress. "No single space project in this period will be more impressive to mankind, or more important for the long-range exploration of space; and none will be so difficult or expensive to accomplish."

You can read Kennedy's full speech to Congress.

Later that year, Kennedy again pitched the moon goal on Sept. 12, this time before a crowd of 40,000 at Rice University in Texas, where he gave one of his most famous and stirring speeches.

Kennedy would not live to see NASA, and the entire country, achieve the lunar goal the president set out in 1961. The president was assassinated in Dallas by Lee Harvey Oswald on Nov. 22, 1963. Six years later, on July 20, 1969, Apollo 11 astronauts Neil Armstrong and Buzz Aldrin landed on the moon, winning the space race and kicking off what would ultimately be six crewed lunar landings during the 17-mission Apollo program. [Presidential Visions for NASA Throughout History]

"What might have happened to Apollo and NASA overall, had Kennedy spent another five years in the White House, can only be a matter of speculation," Logsdon wrote in "Ten Presidents and NASA." "We know the public's association of the space program with Kennedy was so strong that six days after Kennedy was assassinated, the new president, Lyndon Johnson, announced in a nationwide television address that the NASA center from which our moon voyagers would launch would be named in Kennedy's honor."

NASA's John F. Kennedy Space Center in Cape Canaveral, Florida was the launch site for the agency's massive Saturn V rockets that launched Apollo missions to the moon. The spaceport also served as the home for NASA's space shuttle fleet.

According to Logsdon, on the day Armstrong and Aldrin landed their Apollo 11 lander on the moon, an anonymous citizen placed flowers and a note on Kennedy's gravesite at Arlington National Cemetery in Arlington, Virginia.

The note read simply: "Mr. President, the Eagle has landed."