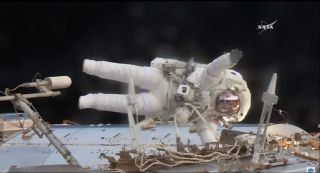 During a spacewalk May 23, NASA astronaut Jack Fischer waved at French astronaut Thomas Pesquet, filming from inside the International Space Station, as Fischer worked to install wireless antennas outside the Destiny lab. The spacewalk's main purpose was to replace a failed data relay box.
(Image: © NASA TV)

NASA astronauts sped through an urgent spacewalk this morning (May 23) to replace a malfunctioning computer relay box outside the International Space Station, completing the trip outside in 2 hours and 46 minutes.

One of two side-by-side multiplexer-demultiplexer (MDM) data relay boxes outside the space station failed Saturday (May 20), and space station managers approved the unplanned spacewalk for the astronauts to replace the box with a spare. When the first computer failed, its backup immediately took over; the computer and backup help control the solar arrays, radiators, robotics and cooling loops on the station. The crew were able to replace the box less than 2 days and 22 hours after the failure through the quickly-organized spacewalk. [Peggy Whitson's Historic Records as a NASA Astronaut (Video)]

Despite the rush, the two astronauts took multiple chances to admire the view during their trip outside the station.

"Epically amazeballs," Fischer added. "That's how beautiful it is."

According to a NASA spokesperson, Whitson built the replacement MDM from spare parts Sunday (May 21). Whitson and NASA astronaut Shane Kimbrough installed the box during a spacewalk on March 30, and mission managers still don't know why it failed, NASA officials said.

The two spacewalkers began 40 minutes early after quickly finishing preparations, and they split up once they left the station airlock. While Whitson set out to remove and replace the failed MDM box, Fischer headed to the Destiny laboratory to install two antennas that will help with wireless communications — the one task the astronauts couldn't do at the end of their first spacewalk together earlier this month.

French astronaut Thomas Pesquet assisted the pair from inside the space station and used a handheld camera to take video of Fischer through the window.

While installing the spare box, Whitson noticed that it wasn't seated quite right and spotted some debris, so the two astronauts had to work together to clean the connector area and reattach the box. Fischer paused his work to drop a tool off with Whitson, then went back to the airlock to grab supplies. He cleaned the trouble spot using a specialized cleaner, similar to a compressed air blower used on Earth, dubbing the bolt holes "clean as a whistle." After that, Whitson carefully bolted in the box again with guidance from the ground, while Fischer finished up with the antennas.

Whitson and Kimbrough ran into a similar issue when they installed the first box March 30, the NASA spokesperson said. Ground control confirmed that the MDM had successfully booted up before the astronauts headed back inside.

This marks the second ultrafast spacewalk for Whitson and Fischer. Two weeks ago, they completed all but one of their tasks in an abbreviated time frame during the 200th spacewalk to be done for the space station, performing all major tasks in just 4.2 hours rather than the originally scheduled 6.5.

On June 2, Pesquet and Russian cosmonaut Oleg Novitskiy will depart the space station in a Soyuz spacecraft headed back to Earth. On June 1, a SpaceX Dragon spacecraft is scheduled to launch, carrying equipment and supplies for the remaining crew: Whitson and Fischer, plus Russian cosmonaut Fyodor Yurchikhin.