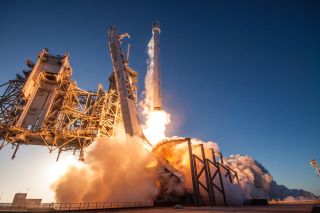 A SpaceX Falcon 9 rocket launches off Pad 39A from NASA's Kennedy Space Center in Cape Canaveral, Florida on May 15, 2017 to orbit the Inmarsat-5 F4 communications satellite.
(Image: © SpaceX)

It's already an amazing sight: Earth from space as seen by a SpaceX camera hitchhiking on a rocket. Then Elon Musk cues Beethoven.

When the billionaire SpaceX founder and CEO unveiled video of Earth from space captured during a flawless Falcon 9 rocket launch Monday (May 15), he set the spectacular view to the soundtrack of Beethoven's "Moonlight Sonata." Instagram awesomeness ensued.

"Moonlight Sonata," Musk wrote simply in the Instagram post with the video Tuesday (May 16). The clip has been viewed a whopping 393,000 times since Musk posted it. (Full disclosure: I was obsessed with "Moonlight Sonata" during my piano classes as a kid.) [See more photos of SpaceX's latest Falcon 9 launch]

Amazing photos were a certainty after SpaceX's Falcon 9 rocket launched the Inmarsat-5 F4 communications satellite into orbit for its customer Inmarsat. The mission blasted off from Pad 39A at NASA's Kennedy Space Center in Cape Canaveral, Florida, at 7:21 p.m. EDT (2321 GMT), about a half-hour before local sunset.

"It's been a great afternoon and evening," SpaceX mission commentator John Insprucker said after the launch success. "All you can ask for today."

SpaceX's photos of the launch show the mission's liftoff in all its glory.

One dramatic shot shows the two-stage Falcon 9 rocket soaring away from below, riding a pillar of flame as exhaust plumes billow out away from the launchpad.

Another view captures the sun low on the horizon as the 23-story Falcon 9 lifts off.

Still another view captures the launch with a long exposure, showing the rocket as a red streak arcing across the evening sky.

The seaside nature of NASA's Kennedy Space Center is clear in another view, which features the Atlantic Ocean as a stunning backdrop as the Falcon 9 soars spaceward.

Monday's launch was SpaceX's sixth launch of 2017 and only the second this year that did not feature a Falcon 9 first-stage booster landing as part of the company's reusable rocket program. The Inmarsat-5 F4 satellite was so heavy (it weighs 13,500 lbs. or 6,100 kilograms) that it took all of the Falcon 9's propellant to reach orbit, leaving none left over for the first-stage booster to return to Earth.

SpaceX plans to launch more than 20 missions in 2017, including the debut flight of its new Falcon Heavy rocket, a heavy-lift booster made up of three Falcon 9 rocket first-stage cores. SpaceX has launched 34 Falcon 9 missions since the rocket's debut in 2010.

The next SpaceX launch is scheduled for June 1, when a Falcon 9 will launch an uncrewed Dragon cargo ship to deliver NASA supplies to the International Space Station.