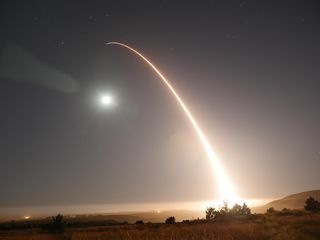 For the second week in a row, the United States Air Force has tested an unarmed intercontinental ballistic missile (ICBM).

The Minuteman III ICBM was launched from a silo at California's Vandenberg Air Force Base this morning (May 3) at 3:02 a.m. EDT (0702 GMT; 12:02 a.m. local California time), military officials said.

"The purpose of the ICBM test launch program is to validate and verify the effectiveness, readiness and accuracy of the weapon system, according to Air Force Global Strike Command," Air Force officials wrote Saturday (April 29) in a statement announcing the test launch.

The two tests have come amid relatively high tensions with North Korea, an unpredictable, nuclear-armed nation that has repeatedly stated a desire to destroy the United States and its allies, including South Korea and Japan.

Pyongyang has been conducting missile tests of its own recently, in violation of United Nations resolutions. The country performed one such test on April 16 and another on April 29. Both of these launches apparently involved medium-range missiles; North Korea is working to develop an ICBM, but most experts think the nation has not mastered the technology yet. (North Korea is a secretive nation whose leaders tightly control the flow of information into and out of the country, so it's tough to get quality information about its weapons program.)

Though the missiles involved in the recent Minuteman III tests were unarmed, the three-stage missile can carry nuclear warheads. The Minuteman III has a maximum range of more than 6,000 miles (9,650 kilometers), according to an Air Force fact sheet.

The Minuteman program began in the 1950s, and the first missile, the Minuteman I, was deployed in the early 1960s. The Air Force currently has about 450 Minuteman III ICBMs, which are spread among bases in Wyoming, Montana and North Dakota, according to the fact sheet.