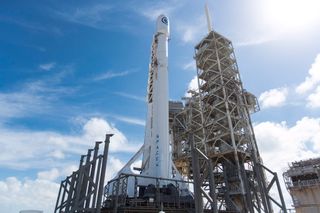 CAPE CANAVERAL, Fla. – SpaceX has pushed back its first launch of a U.S military satellite for Monday (May 1) after a sensor issue triggered a 24-hour delay on Sunday (April 30).

Liftoff of a Falcon 9 rocket carrying a classified satellite for the National Reconnaissance Office is now targeted between 7 and 9 a.m. EDT (1100 and 1300 GMT) from the Kennedy Space Center in Florida.

SpaceX was 52 seconds away from liftoff on Sunday when a sensor issue with the rocket's first stage triggered a hold. [Watch: How SpaceX Is Getting Into Military Launches]

"Out of an abundance of caution we decided to scrub the launch," said SpaceX commentator John Federspiel, a lead mechanical design engineer at the company.

The mission will be the 34th for SpaceX, but its first dedicated flight for the U.S. military.

The secretive NRO, which operates the nation's network of spy satellites, purchased the launch via a contract with Ball Aerospace, agency spokeswoman Karen Furgerson said on Sunday.

SpaceX also has won two contracts with the Air Force to launch Global Positioning System satellites in 2018 and 2019. The company, owned and operated by Elon Musk, has a backlog of more than 70 missions, worth more than $10 billion.