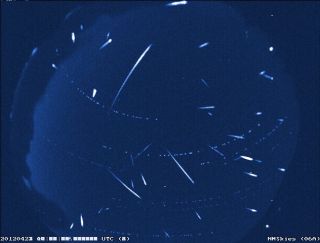 On the evening of April 5, 1861, amateur astronomer A.E. Thatcher was scanning the skies above his home in New York when he stumbled across an unusual object in the constellation of Draco, "the dragon." Thatcher described it as a "tailless nebulosity" roughly two to three times the apparent diameter of Jupiter and glowing at around magnitude 7.5 — too dim to be perceived with the unaided eye, though readily visible with good binoculars.

This object was a comet, which slowly brightened over the next three weeks as it approached both the sun and Earth. On April 28, 1861, the comet became dimly visible to the naked eye and was independently discovered by Carl Wilhelm Baeker from Nauen, Germany. The comet passed about 31.1 million miles (50.1 million kilometers) from Earth on May 9 of the same year, brightening to a respectable magnitude of 2.5, with a short tail measuring about 1 degree in length. What would eventually be named comet Thatcher then passed closest to the sun on June 3 at a distance of 85.5 million miles (137.6 million km), before heading back out into the depths of space. [Lyrid Meteor Shower 2017: When, Where & How to See It]

There is no chance that anyone living today will see this comet when it returns to the inner solar system; its next return is not expected until the year 2276. However, the dusty material left behind by this cosmic litterbug along its orbit produces an annual display of meteors in late April. Late tonight (April 21) into early Saturday morning (April 22) will provide us with the best opportunity to watch for these "shooting stars."

Today, we know them as the Lyrid meteors.

Linking the comet to the meteors

The connection between the Lyrid meteors and comet Thatcher did not come to light until after 1833, when a tremendous "storm" of meteors — the Leonids — took place. That particular swarm of meteors was found to be periodic and took place in the month of November, year after year. That led astronomers to search for other meteor displays that occurred in the same month year after year, and soon it was discovered that higher-than-normal meteor activity seemed to take place during the month of April.

Then, in 1867, professor Edmond Weiss of Vienna noticed that the path of comet Thatcher's orbit seemed to nearly coincide with the Earth around April 20 (even though the comet itself was on its way to the outer solar system).

Later that same year, another astronomer, Johann Gottfried Galle of Germany, proved mathematically that the orbital path of the comet and the orbital path of the April meteors were linked. He successfully traced the history of the Lyrid meteor showers as far back as 15 B.C. in China (another sighting was recorded there in 687 B.C.), and A.D. 1136 in Korea, when "many stars flew from the northeast," according to the book "Meteor Showers: A Descriptive Catalogue," (Enslow, 1988) by Gary Kronk. In the middle of the night on April 20, 1803, the townspeople in Richmond, Virginia, were roused from their beds by a fire alarm; when they looked up at the sky, they observed a very rich meteor display between 1 a.m. and 3 a.m, according to Kronk's book. The meteors "seemed to fall from every point in the heavens in such numbers as to resemble a shower of sky rockets."

Because the meteors appear to dart from a spot in the sky not far from the brilliant blue star Vega, in the constellation of Lyra, "the lyre," they are known today as the Lyrids.

What to expect this year

So if the overnight hours late tonight (April 21) and very early Saturday morning (April 22) are clear, observers may expect to see a fine display of Lyrid meteors.

According to the "Observer's Handbook" of the Royal Astronomical Society of Canada, up to 20 meteors per hour might be seen by a single observer watching under a dark sky. Of course, fewer meteors will be seen from locations where bright lights or obstructions block parts of the sky.

In their book "Observe Meteors: The Association of Lunar and Planetary Observers Meteor Observer's Guide" (Astronomical League, 1986), authors David Levy and Stephen Edberg note of the Lyrids that "…of the annual meteor showers, this is the first one that really commands attention, one for which you can organize a shower observing party with significant chance of success."

While the April Lyrids are not as plentiful as some other annual meteor displays, these shooting stars tend to be bright and fairly fast. Viewing will improve as the radiant — the point in the sky from which the meteors appear to emanate — rises from low in the northeast at the end of twilight to a point high overhead in the early morning hours. The 25-day-old waning crescent moon will not rise until after 4 a.m. local time on April 22, thus assuring dark skies most of the night. The meteor shower's peak of activity usually lasts for just a few hours; its predicted time this year is 8 a.m. EDT on April 22 (12:00 GMT) — good-to-excellent conditions for skywatchers in North America.

Joe Rao serves as an instructor and guest lecturer at New York's Hayden Planetarium. He writes about astronomy for Natural History magazine, the Farmer's Almanac and other publications, and he is also an on-camera meteorologist for Verizon Fios1 News, based in Rye Brook, New York.