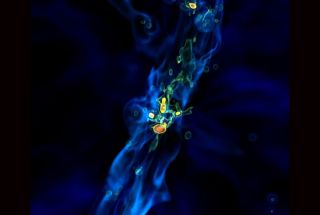 They grow up so fast: A new simulation shows how supermassive black holes could have gotten so large, so quickly in the early universe — by taking a shortcut via a star.

Supermassive black holes form the cores of many galaxies, including the Milky Way, and researchers have found evidence of them dating to very early in the universe's history. In fact, seemingly too early — supermassive black holes take a long time to form, and researchers have been searching for explanations of how they were able to grow so massive (several billion times the sun's mass) within the first billion years after the Big Bang, surpassing their apparent "speed limit" on growth.

According to a new simulation, black holes can only grow so fast, but stars can expand to incredible size even faster in certain conditions before collapsing down into a black hole. That way, the energetic galactic centers can form earlier than expected. The researchers also explained their simulation in a new video.

"It turns out that while supermassive black holes have a growth speed limit, certain types of massive stars do not," Joseph Smidt, a researcher at the theoretical design division of Los Alamos National Laboratory and the first author on the new work, said in a statement. "We asked, what if we could find a place where stars could grow much faster, perhaps to the size of many thousand suns; could they form supermassive black holes in less time?"

The researchers compared their models to the most distant known energetic galactic center, called a quasar, and one of the most massive of those objects, which is also ancient, to see whether that method could have quickly grown them to full size. If ultralarge stars are born in the right environment — one with the ideal combination of rapidly incoming material and local conditions — they could indeed collapse and form quasars of that mass and age, the researchers found.

The simulation also ended up accurately modeling star formation and other phenomena that happen around black holes, the distribution of galaxy densities, gas temperature changes and ionization, the researchers said in the statement.

"This was largely unexpected," Smidt said. "I thought this idea of growing a massive star in a special configuration and forming a black hole with the right kind of masses was something we could approximate, but to see the black hole inducing star formation and driving the dynamics in ways that we've observed in nature was really the icing on the cake."

The new work has been submitted to The Astrophysical Journal, and it is currently available online at arXiv.org.