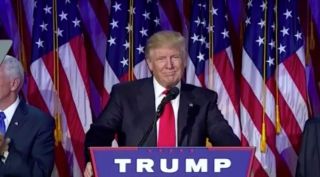 Update for 11:24 p.m. EST: President Trump mentioned space exploration only fleetingly in his first speech before Congress. You can read our full story here: Trump: Sending Astronauts to Distant Worlds Is 'Not Too Big a Dream'

President Donald Trump may make a call for a more robust approach to U.S. human spaceflight during his speech to the Joint Session of Congress tonight (Feb. 28), according to a PBS NewsHour report that cites an unnamed senior administration official.

The report, from PBS NewsHour's John Yang, states only that Trump's speech "will call for [a] return of manned space exploration."

Trump's speech tonight comes one day after the private spaceflight company SpaceX unveiled an ambitious plan to fly two passengers on a private trip around the moon by the end of 2018. SpaceX CEO Elon Musk told reporters Monday (Feb. 27) that the company had received a "significant deposit" from two private individuals for the space tourist moon flight. The mission will send two people on a five-day trip around the moon aboard SpaceX's Dragon crew capsule, using the company's large Falcon Heavy rocket to launch the craft. The Dragon crew capsule and Falcon Heavy rocket are both expected to make their first test flights later this year.

Yang's report also comes less than a week after NASA officials announced that the space agency is studying a plan to fly astronauts in 2019 on the first flight of the new megarocket, the Space Launch System. If NASA approves the plan, it would be the agency's first test flight to carry a crew since the first space shuttle launch in 1981.

"This is still pushing the envelope in some areas, but it's not as big a step technology-wise as what we actually did in the case of the shuttle," Bill Gerstenmaier, NASA's associate administrator for human exploration and operations, told reporters in a teleconference Friday (Feb. 24). "We will be very cautious about what we go do. We will do the right thing."

The United States has maintained a continuous human presence in space with astronauts on the International Space Station since 2000. But NASA has not launched astronauts from U.S. soil since 2011, when the agency retired its space shuttle fleet.