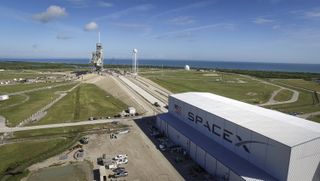 SpaceX aims to boost the launch rate of its Falcon 9 rockets considerably after its new pad at NASA's Kennedy Space Center (KSC) comes online next week, Reuters has reported.

To date, Falcon 9 rockets have lifted off from two sites — Cape Canaveral Air Force Station, which is next door to KSC, and Vandenberg Air Force Base in California. The KSC pad will bring that number to three, and SpaceX is also building a fourth launch site, in Texas.

SpaceX's Cape Canaveral pad is still being repaired after a Sept. 1 explosion that occurred during a routine prelaunch test of a Falcon 9. The mishap destroyed the rocket and its payload, the $200 million Amos-6 communications satellite.

The cost of repairing the Cape Canaveral pad should end up being "far less than half" of the roughly $100 million it takes to build a new launchpad, Shotwell told Reuters.

The Sept. 1 accident grounded SpaceX until Jan. 14 of this year, when the Falcon 9 returned to flight with a liftoff from Vandenberg that delivered 10 satellites to orbit for the communications company Iridium. The Falcon 9's first stage also came back to Earth for a soft touchdown during that mission, marking the seventh such landing success for SpaceX.

SpaceX currently has more than 70 future missions on its launch manifest, which the company has said represent more than $10 billion in contracts.

The Falcon 9 launched for the first time in June 2010 and has chalked up 28 additional missions since then. Twenty-seven of the 29 have been successful. The first failure occurred on June 28, 2015, when a Falcon 9 broke apart less than 3 minutes after launching SpaceX's robotic Dragon cargo capsule toward the International Space Station for NASA. The Sept. 1 explosion was the second failure.