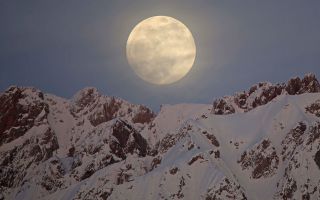 The full moon of February, called the Snow Moon, will occur in the eastern U.S. during the wee hours of Sunday, Feb. 9, about a day before reaching perigee, the closest point to Earth in its orbit — creating a full moon that appears slightly larger than average.

The moon will be in the constellation Leo, the lion, and it will have an apparent width of 0.55 degrees. On average, the moon appears 0.52 degrees wide, so the difference in size will be difficult to see for any but the most dedicated observers, and to most people it won't be noticeable. (For reference, your clenched fist held at arm's length measures about 10 degrees across.)

When the full moon coincides with perigee it is called a "supermoon" — but in this case, the full moon will miss perigee by about a day and a half. There are different definitions of supermoon — some classify it as a perigee that exactly coincides with the full phase of the moon, while others are a bit more relaxed in whether a perigee has to be on the same day.

Supermoons weren't something anyone paid attention to until the late 1970s, when an astrologer (not an astronomer) coined the term for a moon that is within 90% of its closest approach to Earth (perigee). The astronomical term for a moon that coincides with perigee is a "perigean full moon," but that moniker hasn't caught on.

The full moon happens when the moon is exactly on the opposite side of Earth from the sun. Most of the time, the moon is illuminated by sunlight. Once in a while, though, the moon's orbit carries it within the shadow of Earth, as happened in January 2019, when there was a total lunar eclipse. February's full moon will "miss" Earth's shadow, because the moon's orbit is slightly tilted (or inclined) five degrees with respect to the plane of Earth's orbit, and therefore Earth won't be directly between the sun and the moon.

Through binoculars or a small telescope, the full moon appears almost unbearably bright. While it isn't dangerous to one's eyes, it can be hard to spot detail. That is because there are no shadows to give any contrast — we are seeing the lunar surface at noontime on the moon, so the sun (from the perspective of a person standing on the moon) is directly overhead. That said, moon filters are available that can make some features stand out. If one waits a few days after the full moon or observes a few days before, shadows bring out more detail.

A day after the full moon, on Feb. 10 at 6:48 a.m. EST (1148 GMT), the planet Mercury will reach greatest eastern elongation, or the greatest separation from the sun in the sky toward the east. That means it will be visible after sunset, though for observers in midnorthern latitudes, it will still be close to the horizon — about 16 degrees high at sunset, which is at 5:24 p.m. in New York. It will take some time for the planet to become visible because of the sun's glare, but skywatchers should be able to catch it as the sky gets darker. (And please remember that you should never look directly at the sun!)

Related: How to see the 'elusive planet' Mercury in the night sky in February

The full moon shares the sky with a number of bright winter constellations. During February, Orion, the hunter, is visible almost all night, starting the evening high in the east-southeast. Near Orion are Taurus, the bull, and Gemini, the twins. Just to the southeast of Orion is Canis Major, the big dog, home to Sirius, the brightest star in the sky. All three constellations are bright enough that they don't get overwhelmed by the full moon, even in urban areas.

How the "Snow Moon" got its name

According to the Old Farmer's Almanac, February's full moon is called the "Snow Moon" because in midnorthern latitudes, that's when the weather tends to be coldest and snowiest. According to the Ontario Native Literacy Coalition, the Ojibwe (or Anishinaabe) people called it Mkwa Giizis, the Bear Moon. The Cree called it the Kisipisim, or the Great Moon, describing it as a time when "animals do not move around much, and trappers have little chance of catching them."

The Tlingit of the Pacific Northwest call the February full moon S'eek Dís, or Black Bear Moon, while the Haida called it Hlgit'ún Kungáay, or "Goose Moon," according to the Tlingit Moon and Tide Teaching Resource published by the University of Alaska at Fairbanks.

In the Southern Hemisphere, February is during the summer, and the Maori of New Zealand described the lunar month in February to March (as measured between the successive new moons, with the full moon halfway between) as Poutū-te-rangi or "the crops are now harvested," according to the Encyclopedia of New Zealand.