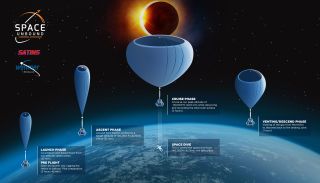 A startup near-space ballooning company plans to not only capture spectacular footage of the Aug. 21 total solar eclipse over the United States, but also break the high-altitude jump records set by Felix Baumgartner in 2012 and Alan Eustace in 2014.

The company, called Space Unbound, launched a crowd-funding campaign on Kickstarter today (Feb. 8) to raise $100,000 from backers for its Helios solar eclipse mission and skydive. Space Unbound is planning an eclipse-day launch with three pilots on board: entrepreneur Per Wimmer, who set a world record in 2008 during a tandem skydive off Mount Everest; David Jankowski, CEO of the Students and Teachers In Near Space (SATINS) program; and Joseph Lazukin, a serial entrepreneur who has several tech and marketing companies under his belt.

"Our goal is to safely send three pilots into near space to capture the 2017 total solar eclipse in 360 HD VR aboard the first commercial near-space vehicle," Space Unbound representatives wrote in their Kickstarter description. The Kickstarter funds will help cover relocation to an alternate launch site in case of bad weather at the company's main location in Nashville, Tennessee. [Where to See the 2017 Total Solar Eclipse, State by State]

Space Unbound is also partnering with HeroX, a newer company from X Prize founder Peter Diamandis, to invite the public to send shoebox-size scientific payloads or projects on the balloon to collect valuable data. The experiments can be submitted for consideration to HeroX's the Civilian Space Challenge here as part of the Helios mission.

According to Lazukin, the experiments will be mounted to a platform extending about 2.5 feet out from the Helios capsule to collect science as the mission's crew records the 360-degree views of the solar eclipse.

After the solar eclipse video and science phases of the Helios project. Lazukin will make the mission's jump, under the current plan. While he has no skydiving or high-altitude balloon experience, Lazukin will train with veteran skydivers in the coming months to simulate jumping at high altitudes, he told Space.com. In that training, Lazukin will focus on how to get out of difficult situations such as the dangerous spin Baumgartner found himself in during his record-breaking jump. [In Photos: Record-Breaking Supersonic Skydive]

Lazukin said he will also rely on the experience of space engineers who are involved in the project through connections with Wimmer or Jankowski (through his organization, SATINS). Space Unbound is currently negotiating with providers to obtain pressurized suits for the jump, and discussing how to make balloons that can go through multiple flights safely, to reduce costs in the long term.

"Once people caught wind about this project, they came behind us and contributed some time or resources or anything to be able to help us," Lazukin said.

The balloon's multiple 360-degree cameras will record the entire journey in high definition. A ground team will monitor weather conditions and the health of the balloon, to determine if it is safe to attempt the jump to break Baumgartner's record of 128,100 feet (39,045 meters) and Eustace's record of 135,890 feet (41,419 m).

Jankowski and Wimmer have been involved with other space and near-space projects before this one. Jankowski's organization, SATINS, for example, assisted Third Man Records in 2016 with the launch and successful playing of the first vinyl record in near space. Wimmer, who is an investment banker, has reservations on space tourism flights with Virgin Galactic, XCOR and Space Adventures, according to his website.

Lazukin said he wanted to emphasize that the flight is not a stunt, but rather a way to draw attention to the new space company's potential. Space Unbound will raise money from sponsorships or from the individual companies involved if the Kickstarter campaign fails to bring in the goal of $100,000. The company said it's just hoping to get the money sooner to ease the complications of getting launch licenses from multiple locations.

You can learn more about Space Unbound's Helios mission at the project's Kickstarter page here.