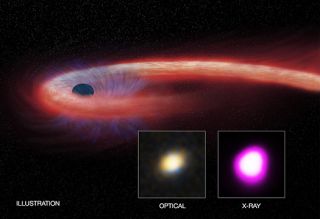 A giant black hole ripped apart a star and then gorged on its remains for about a decade, according to astronomers. This is more than ten times longer than any observed episode of a star's death by black hole.
(Image: © X-ray: NASA/CXC/UNH/D.Lin et al, Optical: CFHT, Illustration: NASA/CXC/M.Weiss )

A supermassive black hole has been gobbling up a star for more than a decade — about 10 times longer than any previously known such meal, a new study finds.

The extreme duration of this meal suggests that the star is incredibly large, or that it's being consumed more completely than any other known star that has fallen prey to a black hole, study team members said.

The astronomers in the study used three space telescopes — NASA's Chandra X-ray Observatory and Swift satellite, and the European Space Agency's XMM-Newton craft — to examine an X-ray source known as XJ1500+154, which lies 1.8 billion light-years from Earth. [Images: Black Holes of the Universe]

XMM-Newton first spotted this source in July 2005 and has continued to monitor it since that time, as have Chandra and Swift. Chandra's observations showed that XJ1500+154 sits at the center of a small galaxy, strongly suggesting that it's associated with a supermassive black hole. (These behemoths, which can contain billions of times more mass than the sun, lurk at the centers of most, if not all, galaxies.)

The X-rays are being generated by a "tidal disruption event" (TDE) — a star or other object that's being torn apart by a black hole's powerful gravity, the researchers said. Some of the doomed body's material falls inward during a TDE, heating up so much that it generates an X-ray flare.

The XJ1500+154 X-ray flare is like nothing astronomers have ever seen, study team members said.

"We have witnessed a star's spectacular and prolonged demise," lead author Dacheng Lin, of the University of New Hampshire, said in a statement. "Dozens of tidal disruption events have been detected since the 1990s, but none that remained bright for nearly as long as this one."

The three telescopes' observations also suggest that the black hole has been growing rapidly while gobbling up the star. This conclusion could shed light on an astronomical mystery — how supermassive black holes managed to grow so big so fast long ago. (Some of these monsters already contained 1 billion solar masses just 1 billion years after the Big Bang that created the universe.)

"This event shows that black holes really can grow at extraordinarily high rates," co-author Stefanie Komossa, of QianNan Normal University for Nationalities in Duyun City, China, said in the same statement. "This may help [us] understand how precocious black holes came to be."

The record-setting meal won't last forever, of course. The team's modeling work suggests that the XJ1500+154 X-ray flare will dim considerably over the next few years, and the food supply will decline significantly over the next decade.

The new study was published online Monday (Feb. 6) in the journal Nature Astronomy.