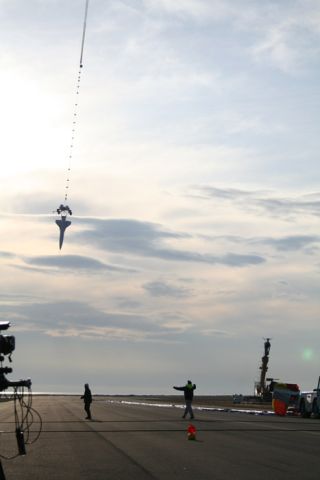 AnItalian aerospace firm is celebrating the first flight of an unmannedspacecraft prototype, though the experimental vehicle was damaged during the13-mile (21-kilometer) drop test.

DubbedCastor, the unmanned space vehicle (USV) prototype reached speeds of up to Mach1.08 as it plunged towards the Mediterranean Sea from a high-altitude balloon, according to the craft's handlers at the Italian Center for AerospaceResearch (CIRA) in Capua, Italy.

Castoris a 30-foot (9.2-meter) long Flying Test Bed-1 (FTB-1) with a wingspan of about13 feet (four meters) and some 500 aerodynamic and structural sensors tomeasure stresses of transonic flight [image].The 2,910-pound (1,320-kilogram)vehicle's drop tests are designed to simulate thestresses on a vehicle as it reenters the Earth's atmosphere, CIRA officialssaid.

"Castorwill have to be rebuilt," Russo said, adding that it would between 12 and 18months to reassemble the experimental space plane.

Castor'stwin--named Pollux--is under assembly with plans for a space-bound version, theFlying Test Bed-X (FTB-X), to be launched on suborbital or orbital flights atopa EuropeanVega rocket by 2012, CIRA officials said of the $234 million(179 million Euro) project [image].

Thedata and lessons learned from Castor's first flight, however, could allow CIRAengineers to modify Pollux for a more complex drop test debut-- dubbedDTFT-2--later this year.

"Inparticular, we feel possible that DTFT-2 will reach a maximum Mach of 1.3-1.4,executing a complex nose-up and turn maneuver, followed by an approach flightin order to make the parachute system opening the easiest possible," Russosaid, adding that the plan depends on the ongoing analysis.