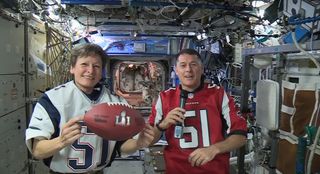 NASA astronauts Peggy Whitson (left) and Shane Kimbrough talk Super Bowl LI and life in space in this video still from a live NASA event on Feb. 1, 2017. The astronauts will watch the 2017 Super Bowl from space.
(Image: © NASA/YouTube)

Sporting football jerseys and with a pigskin in hand, two International Space Station astronauts have made their picks for Super Bowl LI, which kicks off in Houston – home of NASA's Johnson Space Center – later today (Feb. 5).

One astronaut gave an actual Super Bowl pick for winner while another said the station crew has definitely picked the menu for watching the Atlanta Falcons battle the New England Patriots from their home in space. They spoke to reporters and NASA social media fans on Wednesday (Feb. 1) during a televised event at Space Center Houston, next to JSC. [NASA Goes to Super Bowl 2017 (Photos)]

"I'm from Atlanta so I'm picking the Falcons, 30 to 24," NASA astronaut Shane Kimbrough, Expedition 50 commander, said in the video, which NASA posted on YouTube. He added that he is delivering the prediction "straight up" after a journalist asked if he would allow three points' variation. True to his team, Kimbrough wore a Falcons Jersey during the NASA event (Whitson donned Patriots garb).

While NASA crewmate Peggy Whitson didn't give a prediction, she said that the crew will be planning something special to eat during the Super Bowl, which falls during nighttime for the crew. The crew operates on Greenwich Mean Time, which is the same time zone as London, England.

"Luckily, we did get the morning off after, since it's going to be the middle of the night," Whitson said.

The press conference was peppered with Super Bowl references. One person asked if the space station could control its position to be over NRG Stadium during the game, but Kimbrough said the station unfortunately is stuck in an orbit moving at 17,500 mph (28,000 km/h). That said, the astronauts will have live coverage of the game beamed to the station.

Another question concerned how the astronauts would send their bets to a bookie and more importantly, how the bookie would collect if the astronauts owed money.

When asked if it would be better to play football on the moon or Mars, Kimbrough picked the moon — because he grew up watching the Apollo missions work there in the 1960s and 1970s — and Whitson picked Mars, the destination that NASA is aiming to land humans on in the 2030s. NASA has put footballs through the extreme tests for spacecraft, and even tossed a football on the space station to see how far it could fly in weightlessness.

The astronauts also addressed the importance of exercise more generally, as well as how working on a space station has similar aspects of teamwork to being on a sports team.

"It's important in small groups, like the group that we have up here, but more importantly it's actually a fantastic relationship that we have with ground teams all over the world," Whitson said. "That teamwork is very, very special to us."

Whitson and Kimbrough closed their discussion with a special request from moderator (and former astronaut) Leland Melvin. Whitson sent Kimbrough on a "down and out" away from the camera. Whitson lobbed the football to Kimbrough, who caught it easily while drifting out of the room.