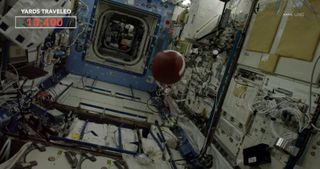 NASA astronaut Tim Kopra threw a football pass down the length of the International Space Station. Considering that the station travels at 17,500 mph (28,163 km/h), NASA estimated that the ball was technically covering about 8,800 yards per second (8046 m/s) as seen from Earth.
(Image: © NASA)

Has a NASA astronaut set a new record for the longest football pass in history? A new video shot in orbit aboard the International Space Station captured the incredible feat.

The space station orbits the Earth at a speed of about 17,500 mph (28,163 km/h). Therefore, when astronaut Tim Kopra gently tossed a football down the length of the station, the ball was technically covering about 8,800 yards per second (8046 m/s) as measured by someone standing on Earth. In total, the ball traveled 564,664 yards (516,328 meters), according to the video, and NASA posed the question, "Is this a new world record?" [NASA Goes to Super Bowl 2017 (Photos)]

We're guessing that Guinness World Records will not grant Kopra the record, considering that he too was traveling at an incredible speed when he threw the ball.

Kopra returned home from his latest trip to the orbiting laboratory in June 2016, so it seems NASA has been holding on to this potentially record-setting footage for a while, and chose to release it ahead of the 2017 Super Bowl this Sunday (Feb. 5).

NASA has made its presence known at this year's Super Bowl, which will take place in Houston, home of the Johnson Space Center. Leading up to the big game, visitors to Houston can check out a free festival taking place at Discovery Green, located in the city's downtown area. There, the main attraction, called "Future Flight," is a virtual reality roller coaster that simulates a spacecraft landing on Mars.