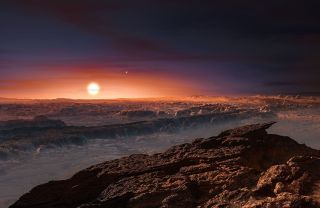 Tiny spacecraft could actually study Proxima b from orbit rather than just zoom past the newfound, potentially habitable alien world, a new study suggests.

The Starshot team's long-term vision involves sending fleets of these sail craft to nearby stellar systems, including Alpha Centauri, a double star that lies just 4.3 light-years from Earth. At 20 percent the speed of light, such probes could theoretically get to Alpha Centauri just 20 years after lifting off. [Images: The Breakthrough Starshot Interstellar Sailing Project]

The original Starshot plan calls for missions to this planet (known as Proxima b), or to any other destination, to be flyby affairs; the nanoprobes would snap photos and collect other data as they hurtle by at breakneck speed. But it doesn't have to be this way, according to the new study, which was led by René Heller of the Max Planck Institute for Solar System Research in Göttingen, Germany.

Heller and co-author Michael Hippke, an IT specialist, performed computer simulations showing that Starshot-like probes could slow down enough at Alpha Centauri to be captured into orbit there. This deceleration would come courtesy of the binary's starlight pressure — which would push back on the nanoprobes' sails, just as outgoing photons would have pushed the spacecraft forward at the beginning of its trek — and the gravitational pull of the Alpha Centauri stars.

This strategy would allow the probes to gather much more data than they'd collect during a superfast flyby, which would be over in a matter of hours, the researchers said.

There are some catches, however. For example, Heller and Hippke found that this deceleration strategy would likely only work for probes traveling a maximum of 4.6 percent the speed of light — meaning it would take the sail craft about 95 years, rather than 20 years, to get to Alpha Centauri. The journey from Alpha Centauri to Proxima Centauri would take an additional 46 years, the researchers determined.

Furthermore, the probes' sails would have to be enormous to catch enough light to slow down — about 1.1 million square feet (100,000 square meters), or the size of 14 soccer fields, Heller and Hippke said. (This assumes that the sails are made of graphene, or some other material that's similarly lightweight and tough.) The baseline Breakthrough Starshot concept, by contrast, envisions a deployed sail that's no larger than 172 square feet (16 square m).

On the plus side, such a gigantic sail would allow probes to get up to interstellar speeds solely by catching light from the sun, obviating the need for a laser system, Heller and Hippke said.

The researchers aren't advocating their concept as a replacement for Starshot's planned flyby missions. Rather, the two ideas could serve as a sort of one-two punch in interstellar exploration, Heller and Hippke said.

"Our new mission concept could yield a high scientific return, but only the grandchildren of our grandchildren would receive it," Heller said in a statement. "Starshot, on the other hand, works on a timescale of decades and could be realized in one generation. So we might have identified a long-term, follow-up concept for Starshot."