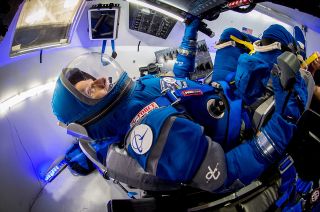 Chris Ferguson, Boeing director of crew and mission systems and a former astronaut, checks out the new, blue Starliner spacesuit in a mockup of the company's commercial crew spacecraft.
(Image: © Boeing)

A new astronaut garb has grabbed attention for its distinctive blue color, but for those familiar with history, it shares the shade with spacesuits past.

The Boeing Company recently revealed its new pressure garment that NASA crews and commercial passengers will wear for flights on board its CST-100 Starliner spacecraft, starting as soon as 2018. The suit, which features Reebok-inspired footwear and touchscreen compatible gloves, was designed to be lighter and less bulky than prior launch and entry outfits.

And it is blue.

"It feels good to walk around in Boeing Blue," stated Chris Ferguson, Boeing's director of CST-100 Starliner crew and mission systems and a former astronaut who commanded the final space shuttle mission. "Spacesuits have come in different sizes and shapes and designs, and I think this fits the Boeing model, fits the Boeing vehicle." [Boeing's Awesome New Spacesuit in Pictures]

Blue is Boeing's dominant trademark color and it matches elements of the Starliner's interior. Astronauts will wear the dark-hue, form fitting suit during launch and re-entry. They will sport either a Boeing logo or a NASA insignia patch — depending on who they represent — on the right shoulder, an American flag on the left, and Starliner patch and name tags across the front.

Permanent logos are sewn into the spacesuit's fabric while mission-specific emblems attach by Velcro, said Boeing.

Beyond its aesthetic appearance, the Starliner suit sports zippers to increase comfort and shed weight, and features a hood-like soft helmet with a wide polycarbonate visor for expanded peripheral vision. Overall, the garment provides greater pressurized mobility and is about 40 percent lighter than previous spacesuits.

Although the public might think of silver, white and orange as the more traditional colors of spacesuits, the company behind Boeing's Starliner attire has worked in blue fabrics before.

David Clark also designed the pilot's protective assembly worn to fly Lockheed Martin's U-2 and SR-71 high-altitude reconnaissance aircraft. Although the suit was more often seen with a yellow-gold outer layer, the company did make prototypes and at least one model in blue, based upon the desire by U.S. Air Force pilots (according to "Dressing for Altitude" by Dennis Jenkins, 2012, NASA).

The company modified its high-altitude suit for use on the space shuttle in the wake of the 1986 loss of space shuttle Challenger. Although, ultimately, all of the launch and entry suits astronauts wore into space had bright orange Nomex covers — better to assist in search and rescue efforts had the crew needed to ditch into the ocean in an abort — the first suits David Clark delivered to NASA in 1987 sported dark blue exteriors.

The STS-26 and STS-27 crews, which were the first to fly after the Challenger tragedy, trained for their missions with the blue suits.

David Clark is not the only company to have designed blue spacesuits.

When the U.S. Air Force needed spacesuits for its Manned Orbiting Laboratory (MOL), a planned space station based on Gemini and Titan vehicles for classified reconnaissance — it turned to Hamilton Standard (now UTC Aerospace) in 1967. [The Evolution of the Spacesuit in Photos]

Although they never flew in space, at least 15 of the model MH-7 suits — some with a blue nylon outer layer — were built for training before the program was canceled in 1969.

Hamilton Standard was also part of the team that designed and manufactured the suits for NASA's Apollo program to send astronauts to the moon.

The lunar suits would become iconic for their bulky, white look, however, their restraint layer — the fabric under the exterior cover that gave the suit its shape and included the mobility elements needed to enable the astronaut to move — was in fact, blue.

"The final Boeing spacesuit design required a significant amount of give and take from those who provided input," stated Boeing in a company publication. "A blue and white suit was considered but it wasn't as cost-effective as one that was all blue."

Though not the only spacesuits to sport the hue, Boeing's Starliner garments will become the first blue pressure suits to enter orbit in the next few years.

See more photos of blue spacesuits and watch a video about Boeing's Starliner spacesuit at collectSPACE.