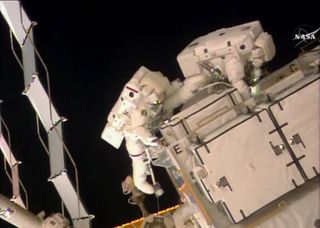 Two NASA astronauts breezed through a spacewalk at the International Space Station today (Jan. 6) while performing upgrades to the outpost's power supply.

Expedition 50 commander Shane Kimbrough led the way as he and flight engineer Peggy Whitson ventured outside the space station into the void of space at 7:23 a.m. EST (1223 GMT).

Kimbrough and Whitson then spent more than six hours outside the space station on a mission to install three adapter plates and configure electrical connections in preparation for a new set of batteries that will be installed on the space station. These experienced spacewalkers zipped through their goals in a little over four hours, leaving enough time to complete three "get-ahead" tasks and even snap a few photos. [In Photos: Space Station Astronauts Take Spacewalk to Upgrade Power System]

This was the first of two spacewalks astronauts will perform this month to finalize the replacement of 12 old nickel-hydrogen batteries six with new lithium-ion batteries. In a pre-spacewalk interview on NASA TV, Whitson said that the new batteries are exactly like the lithium-ion batteries in cell phones, only much bigger — one battery is about half the size of a standard refrigerator.

Nine of the old batteries will be shipped off along with the next cargo craft to depart the space station. Three remain on the station, disconnected and disconnected from the power grid. To integrate the new lithium-ion batteries into the existing power system, the astronauts also had to install adapter plates.

As Kimbrough and Whitson emerged from their EVA suits, NASA TV commentator Rob Navias wrapped up the live coverage by saying that the astronauts had "completed all of the work associated with the battery upgrades for the 3A power channel on the International Space Station — work to be replicated by the ground robotics team over the next week that will set the stage for Kimbrough to venture back outside into the void of space a week from today along with Thomas Pesquet," a French astronaut of the European Space Agency who will do his first spacewalk on Friday (Jan. 13).

Today's spacewalk marked the third in Kimbrough's career and the seventh for Whitson. Whitson also matched the existing record of most spacewalks done by a woman. She is also the oldest woman to travel to space. Whitson's accumulated spacewalk time is now 46 hours and 18 minutes, and Kimbrough now has 19 hours and 24 minutes.