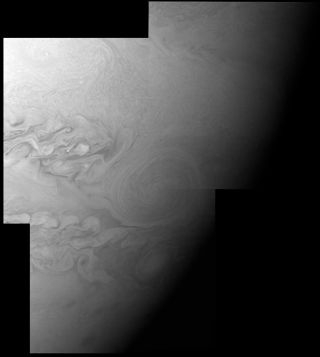 Visions ofa volcanic plume spewing out of Jupiter’smoon Ioand a swirling storm are among the first images returned by a NASA probe as itapproached an early-Wednesday swingpast the gas giant.

NASA’sNewHorizons spacecraft sent home the new look at Jupiter’s “LittleRed Spot” [image]and the planet’s volcanic moon Io [image]as it closed in on the gas giant during a planetary flyby that reachedits closest approach at about 12:43 a.m. EST (0543 GMT).

AlanStern, the mission’s principal investigator at SwRI, said NewHorizons was aiming for a 500-mile (804-kilometer) corridor around Jupiter asit flew along its path some 500 million miles (804 million kilometers) fromEarth. The spacecraft is now hurtling away from the Sun at 52,000 miles perhour (83,600 kph).

At itsclosest pass, New Horizons swung within 1.4 million miles (2.3 millionkilometers) of Jupiter before shooting onward on a course through the gasgiant’s long magnetotail [image]-- the non-Sunward side of the Jovian magnetic field. It is during that timethat astronomers hope to uncover new secrets of the interactions between Jupiter’smagnetosphere, the Sun’ssolar wind and the gasgiant’s aurora displays [VIDEO:Passport to Pluto].

Launchedin January 2006, New Horizons grabbed a 9,000-mile per hour(14,484 kph) speedboost from its pass through Jupiter’s strong gravity field. The extraspeed, mission managers have said, will cut three years on New Horizon’slong trek for its flyby of Plutoand its threemoons Charon,Nix andHydra [image].

The AppliedPhysics Laboratory at Johns Hopkins University in Maryland is overseeing themission for NASA and reported Wednesday that the spacecraft is in good healthafter its closest Jupiter approach.

As a sortof flyby appetizer, the fresh look at Io by New Horizons has provided theclearest view to date of the Jovian moon’s Tvashtar volcano, missionmanagers said in a written statement.

The probeused its Long Range Reconnaissance Imager (LORRI) to photograph Io from a rangeof about 2.5 million miles (four million kilometers) on Feb. 26, 2007 as itneared Jupiter. Other images from the camera in the last two days include a newportrait of Jupiter’s moons Ganymede [image]and Europa [image],and the immense “LittleRed Spot,” a swirling storm about half the size to the planet’s“GreatRed Spot” [image].

“Peoplewere over there in the science area and those guys were just grinningear-to-ear looking at the stuff that’s coming down,” Bowman said,adding New Horizons’ new Little Red Spot and Tvashtar volcano portraitsare her current flyby favorites. “It feels good.”

Firstdiscovered in 1999 in ground observations and by the Galileoprobe, the Tvashtar volcano is one of Io’s most active features andcan be seen spouting a dust plume more than 150 miles (241 kilometers) high toform an umbrella-like shape [image]in the New Horizons view.

Io’sTvashtar volcano can be seen in another New Horizons image, a three-millisecondexposure aimed at resolving surface features, where it appears to be a darkspot in the 11 o’clock position surrounded by a dark ring [image].The eruption’s volcanic fallout covers a region the size of Texas,New Horizons officials said.

The new Ioimages of the plume resolve features as small as 12 miles (20 kilometers) insize, which is about 12 times sharper than those taken by the Hubble Space Telescope andthree times sharper than views snapped by the Cassini spacecraft, which flewpast Jupiter in late 2000 on its way to its current orbit around Saturn, New Horizons officials said.

"Ifthe Tvashtar plume remains active, the images we take later in the encountershould be even better," Spencer said.

NewHorizons fresh Jovian system images are just some of the more than 700science observations planned during the probe’s Jupiter flyby. Thebulk of those images, however, will remain locked inside the spacecraft’scomputer for later downlink to Earthin March and April, mission managers have said.