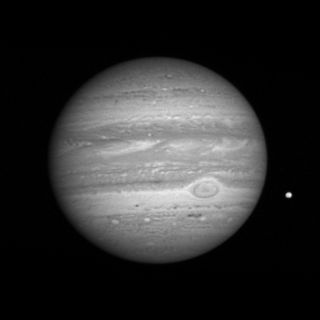 A NASAprobe hurtling towards Pluto will hitthe accelerator next month when it flies past the planetary giant Jupiter.

The NewHorizons spacecraft is due to make its closest pass by Jupiter on Feb. 28and add another 9,000 miles (14,484 kilometers) per hour to its velocity as itspeeds out towards a rendezvous with Pluto in July 2015 [image].

"This is abig test for our mission," said AlanStern, NASA's New Horizons principal investigator at the Southwest ResearchInstitute in Boulder, Colorado. "We're actually beginning to get data,important scientific data, which my team is going to be rabid to work with assoon as we get it on the ground."

NewHorizons' swing past Jupiter is a rehearsal of sorts for its ultimate flyby of Pluto and its moonsin 2015 [image].The probe will not only study Jupiter's turbulent atmosphere, but scan itsauroras, rings, moons and - for the first time ever - the planet's trailingmagnetic field.

"There isno mission plan to do another flyby like this of the Jupiter system," saidStern, who spoke during a Thursday mission briefing at NASA's Washington, D.C. headquarters.

NASA launchedits New Horizons mission one year ago Friday on what the space agency has billed as its fastestflight to the outer rim of the solarsystem [video].

With its seveninstruments, New Horizons is designed to study Pluto, its three moons - Charon,Hydra andNix - and distant icy objects in the KuiperBelt that lie beyond the orbit of Neptune.Those objects, researchers hope, contain 4.5 billion-year-old traces of thesolar system's building blocks.

What NewHorizons finds at Pluto and in the Kuiper Belt should help astronomers answer"some fundamental questions about the origin of the solar system," James Green,acting director of NASA's Solar System division, during the briefing.

The probeis currently 41 million miles (65 million kilometers) from Jupiter andclosing at a speed of about 44,268 miles (71,242 kilometers) per hour.

At itsclosest approach, New Horizons will swing within 1.7 million miles (2.3 millionkilometers) of Jupiter to grab a gravity boost that will shave three years offits flight to Pluto, researchers said [image].

"We'vedesigned this particular flyby to be a stress test on our spacecraft to workout the kinks," Stern added.

With 700separate Jupiter system observations planned during its Jovian encounter, theNew Horizons probe will be far from idle when it swings past the gas giant planet.

"We'll bemaking the most of this opportunity to learn a lot about Jupiter itself," saidJohn Spencer, deputy chief of New Horizons' Jupiter encounter science team atSwRI.

New Horizonshas already made an unexpected find within Jupiter's atmosphere. Its initialset of black and white images of the planet's notorious tempest the Great RedSpot taken earlier this month revealed that a turbulent region to the storm'snorthwest - as seen by the Cassiniprobe in2000 - appears to have calmed.

"Thatregion looks really quite cloud-free," Spencer said. "So that's not what weexpected."

But forsome, the highlight comes after the probe's flyby, when New Horizons will flythrough Jupiter's magnetotail, the trailing portion of the planet's magneticfield that extends outward away from the Sun[image].

"Nospacecraft has ever been there. We don't know what happens there," Spencer saidof Jupiter's magnetotail. "It just so happens by good luck that the path toPluto leads us right down the magnetotail."

Astronomersestimate Jupiter's magnetotail sweeps across six astronomical units - or sixtimes the distance between the Earthand Sun - to reach the orbit of Saturn.One astronomical unit, or AU, is about 93 million miles (149 millionkilometers).

"This is awhole new zone of the solar system," Stern said of New Horizons stompinggrounds. "It opens up a window into the outer solar system and a window back intime 4.5 billion years to the birth of the planets."