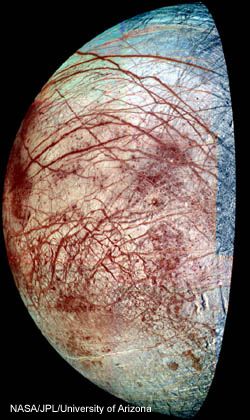 Europa, a Jovian moon, is in half shadow in this color-enhanced image from the Galileo spacecraft. The cracks in the icy surface are thought to be caused by heated up-wellings of the water below. Microbes similar to those found in the Earth's ocean floor may exist on Europa.

NASA'snewly issued budget has lowered a flagship mission of exploration to half-mast.Backed by scientists and study groups, a mission to Jupiter's moon Europa ismissing in action within the pages of NASA's Fiscal Year 2007 budget unveiledyesterday.

Thesmallest of Jupiter's Galilean satellites--about the size of Earth's Moon--Europa has a facade of white and brown colored water ice. Hidden under that frozencrust, Europa may well harbor a global ocean of liquid water. And coupled tothe prospect for a subsurface ocean comes the tempting thought of life.

"NASA'srobotic exploration program is being flat-lined, setting aside a mission toEuropa to search for its ice-covered ocean and perhaps for life itself," PlanetarySociety Executive Director, Louis Friedman, said in a statement released Monday.

Lastyear, the U.S. Congress directed NASA to plan a fiscal year 2007 start on aEuropa mission. "If the proposed budget is adopted, that directive will be ignored,and no Europa mission will be planned," the Planetary Society statement noted.

So many false starts

"I am disappointed thatafter so many false starts over the last decade, it looks like a mission toEuropa is slipping once again," said Ronald Greeley, a leading planetary scientist in theDepartment of Geological Sciences at Arizona State University in Tempe. He also chairs a Europa focus group of scientists keen on furthering the study of theJovian moon.

Greeley told SPACE.comthat the hope had been that a serious study of a Europa mission would becompleted this year in anticipation of a NASA new start very soon.

Europaas well as Titan "are of extremely high scientific interest," said JonathanLunine, Professor of Planetary Sciences and of Physics at the University of Arizona in Tucson.

Likethe Galileo spacecraft that bolstered the hunger to plumb the mysteries ofEuropa, the Cassini/Huygens probe has revealed Titan to be a captivating worlddemanding more scrutiny.

Missionsto both worlds should be flown "as the cornerstones of a vigorous effortto explore astrobiologically interesting bodies in the outer solar system,"Lunine said. "The technology is there. All that is needed is the will to exercise it," he added.

The most recent debacle inthe pursuit to explore Europa was the NASA Prometheus effort--making use anuclear reactor to power a set of ion thruster engines. A first flight missionwas dubbed the Jupiter Icy Moon Orbiter--JIMO for short.

JIMO was to search forevidence of global subsurface oceans on Jupiter's three icy Galilean moons:Europa, Ganymede, and Callisto. The mission was ballyhooed as setting the stagefor the next phase of exploring Jupiter and opening the rest of the outer solarsystem to detailed exploration.

The fire was extinguishedon Prometheus. It flamed out given budget and technical stresses.

NASA chief, Mike Griffin, told a U.S.Senate subcommittee in May 2005 that JIMO was in his opinion, "too ambitious tobe attempted."

Griffin said JIMO "was not a mission, in myjudgment, that was well-formed" and the mission's original purpose was toexecute a scientific mission to Europa, "which is extremely interesting on ascientific basis," he told lawmakers.

"It remains a very high priority, and youmay look forward, in the next year or so, maybe even sooner, to a proposal fora Europa mission as part of our science line," Griffin testified. "But we wouldnot--we would, again, not--favor linking that to a nuclear propulsion system."

Johnsonsaid that using the technology developed during past work on a Europa Orbiter,as well as the JIMO studies, helps justify going forward on plotting out a newand highly-productive Europa mission.

"Wehave continued to study what can be done with existing technology to make a viableEuropa mission with a great data return possible," Johnson told SPACE.com.He noted that his personal and professional opinions on the matter are his ownand do not, in any way reflect the opinion or policy of JPL.

RobertPappalardo, Assistant Professor in the University of Colorado at Boulder's Department of Astrophysical and Planetary Sciences and Laboratory forAtmospheric and Space Physics said the outer planets community of scientists hasstamped priority "#1" on exploring Europa. A leading look at a spacecraft forthat mission is tagged the Europa Explorer. Imbued with radiation hardeningtechnology for a longer stay-time in orbit around Europa, as well asEarth-to-Europa trajectory pluses, a mission to this moon is far more compellingnow than in previous times, he said.

"We'vespent quite a bit of time and effort trying to understand was Mars once ahabitable environment. Europa today, probably, is a habitable environment,"Pappalardo advised. "We need to confirm this...but Europa, potentially, has allthe ingredients for life...and not just four billion years ago...but today."

Anuclear-powered Europa Explorer would be loaded with scientific gear.

Forexample, the Europa orbiting spacecraft could be outfitted with ice-penetratingradar to detect shallow water, or partial melt. If the moon's icy face is thin,or thin in spots, that radar could possibly penetrate through the ice to anocean.

Alsoonboard would be a camera system, infrared sensor hardware, as well asequipment to discern the crunching, cracking, creaking, and overall strength ofEuropa's ice shell - to help validate that the moon really does have a globalliquid water ocean, Pappalardo explained.

Pappalardosaid a lander is still being bandied about, but carrying what kind oftechnology and at what cost are questions awaiting answers.

"We'renot going to search for life with this mission. But just like the Mars roversin their search for habitable environments...we're going to characterize thehabitability of Europa," Pappalardo said.

Anorbiter to the moon of Jupiter would allow a now sketchy view to become sharpas to how this world works, Pappalardo concluded. This mission, he said, hascompelling science and broad community support and "we're ready to go."

WhileNASA's new budget carries dire news, there are other works-in-progress in termsof Jupiter and the study of Europa.

In June of last year NASA announced that a mission to fly to Jupiter will proceed to a preliminary design phase. That program is called Juno, and it is the second in NASA's New Frontiers Program - of which the now en route New Horizons mission to Pluto is the first in this category. JUNO would conduct a first-time, in-depth study of the planet Jupiter. It must be ready for launch no later than June 30, 2010, within a mission cost cap of $700 million.

Also,the European Space Agency (ESA) is currently studying the Jovian Minisat Explorer(JME). The JME focuses on exploration of the Jovian system and particularly theexploration of its moon Europa. The ESA study is also looking into deploying a compactmicroprobe onto Europa to perform on-the-spot measurement of the moon's icecrust.