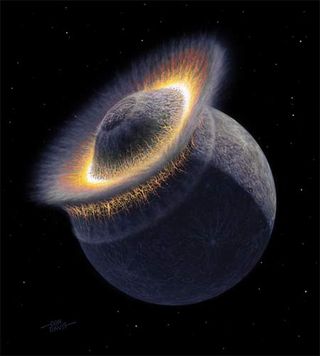 The twomoons discovered around Pluto last year were likely formed from the same giantimpact that created the planet's much larger satellite, Charon, scientistssay.

The ideasuggests that other Kuiper Belt Objects might also harbor multiple satellitesand raises the possibility that Plutois encircled by rings fashioned from debris ejected from the surface of thetiny moons.

The twomoons, called P1 and P2 for now, were discoveredin May 2005 using the Hubble Space Telescope. Scientists now think the two moonsare roughly 37 and 31 miles (60 and 50 km) in diameter. Charon has an estimateddiameter of about 750 miles (1,200 km).

The moons'tiny sizes raise the possibility that even more satellites might be discoveredaround Pluto in the future.

"The very smallmasses of P1 and P2 relative to Charon beg the question of why ... there arenot more small satellites of Pluto," a team of researchers write in the Feb. 23issue of the journal Nature. "Perhaps there are other, still faintersatellites that escaped detection."

Because ofhow P1 and P2 move, scientists think they were formed from the same collisionthat, according to the leading theory, spawned Charon.

"The smallmoons are in circular orbits in the same orbital plane as Charon, and they arealso in, or very near, orbital resonance with Charon," said study leader AlanStern of the Southwest Research Institute (SwRI).

For everytwelve orbits Charon makes around Pluto, P1 makes almost two orbits and P2completes nearly three. This ratio would likely not be constant if P1 and P2were merely passing objects captured by Pluto's gravity. The most likelyexplanation for this arrangement, scientists figure, is that all three moonswere born of the same event.

Collisionsbetween large objects helped shape many aspects of our solar system. The Moon,for example, is believed to have formed when a Mars-sizedobject slammed into Earth 4 billion years ago. The crash that's thought tohave created Pluto's moons is believed to have occurred at around the sametime.

Scientistswill get a closer look at Pluto and its moons when NASA's recently launched New Horizon mission reaches thesystem in 2015.

Scientistshave determined that up to a fifth or more of known Kuiper-belt objects (KBOs) harborsatellites or belong to binary systems; the new modeling suggests that therecould also be numerous systems consisting of three, four or even more bodiesgrouped together.

But findingthese systems is difficult because of the distances involved. The Kuiper beltis a region of space populated by asteroids and comets and other rocky, icybodies; it is located beyond Neptune, between 30 and 50 AU from Earth. One AU is equal to thedistance from the Earth to the Sun.

However,KBOs and their satellites are occasionally ejected from the Kuiper Belt and getflung closer to the Sun, where they become easier to spot. Steffl said a goodway to determine whether KBOs with multiple satellites are unusual or the normis to search for satellites around these outcasts, which are known as"Centaurs."

"We hope touse Hubble to search for faint moons around some of them," Steffl said.

Thediscovery of P1 and P2 also raises the intriguing possibility that impactdebris from the small moons is captured by Pluto's gravity and coalescing intorings or even arcs around the tiny planet. If confirmed, it would be the firstexample of a ring system around a solid body rather than a gas giant planet.