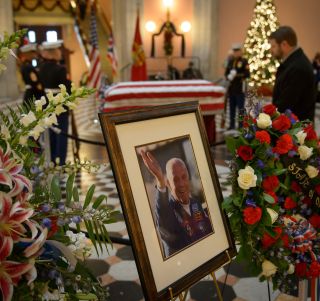 Members of the public pay their respects to former astronaut and U.S. Senator John Glenn as he lies in repose, under a United States Marine honor guard, in the Rotunda of the Ohio Statehouse in Columbus, Friday, Dec. 16, 2016.
(Image: © NASA/Bill Ingalls)

NASA will celebrate the life and legacy of pioneering astronaut John Glenn with a memorial service at Ohio State University today (Dec. 17), and space agency officials will provide a live webcast of the service for the public.

Ohio State University in Columbus will host the memorial service for Glenn, who died on Dec. 8 at age 95. The service, entitiled "John Glenn: Celebrating a Life of Service," will begin at 2 p.m. EST (1900 GMT) and will be streamed live on NASA TV. You can also watch the webcast here, courtesy of NASA TV.

"One of NASA's original seven Mercury astronauts, Glenn, who died Dec. 8, also served 24 years in the U.S. Marine Corps and four terms as a U.S. senator from Ohio," NASA officials wrote in a statement. "His flight on Friendship 7 on Feb. 20, 1962, showed the world that America was a serious contender in the space race with the Soviet Union. It also made Glenn an instant hero." [John Glenn: An American Hero's Greatest Moments]