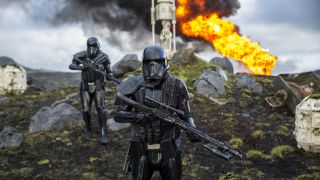 The alien worlds of "Star Wars" — even when not on fire, as in this "Rogue One" shot — don't always make sense ecologically.
(Image: © Jonathan Olley/Lucasfilm)

Movies like the upcoming "Rogue One: A Star Wars Story" often blend science with fiction. To separate the two, a panel of scientists convened in Atlanta in September during Dragon Con to discuss the potential science of the overall "Star Wars" universe. Led by journalist Rachel Pendergrass, the speakers included astrophysicists Erin Macdonald and Roy Kilgard, engineer Andy Dykes and biologist Eric Spana.

One of the first questions the panelists dove into was the science of lightsabers, the high-energy beams wielded by Jedi knights and their enemies in the films.

"That's why I got into physics — to make a lightsaber," said MacDonald, a systems engineer with Stellar Solutions who previously worked with the LIGO collaboration on gravitational waves. ['Rogue One: A Star Wars Story' in Pictures]

The panelists quickly agreed that the lightsabers were composed of high-energy lasers, which can vary significantly in how their radiation can penetrate material. The real problem with building your own lightsaber is creating a definite end point to the laser's travel.

Today, many physics labs host high-energy lasers with wavelengths across the electromagnetic spectrum. Signs on the labs' walls and doors caution that these rooms contain powerful equipment capable of causing serious injury.

"There are some really scary lasers in physics labs that I would not come near because it's death," Macdonald said. "Effectively, that's a lightsaber."

She pointed out that many undergraduate students expect those lasers to be more like the on-screen weapons, and come away disappointed. Instead, the beam is often invisible unless smoke or some other material drifts into its path.

That's why the blaster bolt halted in midair in "Star Wars VII: The Force Awakens" probably wasn't a laser. If it had been, it wouldn't have been visible until it reached your eye. Instead, the panelists considered the possibility that it might be a clump of superheated plasma.

So, if lightsabers are some form of contained high-energy beam, what could hold it in place? The panelists speculated that perhaps the solution related to the Force, the fictional energy that permeates the "Star Wars" universe. Perhaps the Force somehow contained the beam, truncating its length into something Jedi could use to destroy their enemies, the panelists surmised.  [Strange Cinema: Space.com's Favorite Offbeat Space Movies]

"Lightsabers are emitting radiation to destroy you? Don't hold [yours] between your legs," joked Kilgard, who studies high-energy astrophysics at Wesleyan University in Connecticut.

The power of the Force

The Force is the driving energy in the "Star Wars" series, giving both Jedi and Sith the ability to manipulate objects with their minds. The panelists quickly decided to ignore the biological cause of the Force introduced in the prequels — midi-chlorians, or microscopic life-forms that exist within all living cells and are essential to life — in favor of energy manipulation.

One of the first Force-related subjects they latched onto was the differences in ability exhibited by different characters in the "Star Wars" movies. Of all the Force-wielding characters, only people on the dark side seem to produce Force lightning. Perhaps the light side was equally capable of doing so but instead chose not to use such destructive measures, the panelists speculated. Dykes pointed out that Anakin Skywalker, the Jedi who went from the light side to the dark side, did exactly that, only creating lightning attacks after he became Darth Vader.

The scientists also discussed how one person may be gifted with the Force while others are not. They quickly dismissed the idea that it was passed down through genes alone. Although the "Star Wars" series centers around Anakin, his son Luke and his grandson (through Luke's sister Leia) Kylo Ren, the family seems to be an anomaly. Anakin incurred the wrath of the Jedi Council when he married Padmé Amidala, because Jedi were not allowed to marry. That strongly suggests that the Jedi ranks weren't replenished by the children of Jedi knights.

"It seems more like a contagion that you can catch and pass on to your offspring rather than a simple mutation — the Force as a disease," Pendergrass mused.

Faster than a speeding Wookiee

Faster-than-light travel is a key technology in the "Star Wars" universe, allowing Rebels and members of the Imperial fleet to travel across the galaxy at a rapid clip. As with most science fiction, the ability to race faster than the speed of light defies known laws of the universe.

"You can bend and manipulate space-time if you have enough energy to do that," Macdonald said. She suggested that perhaps the hyperdrive envelops "Star Wars" ships in a bubble of space-time. [Warp Drive More Possible Than Thought, Scientists Say]

Evolution on other worlds

The planet Tatooine is a desert world, yet a major life-form on the planet is the large and hairy bantha, an elephant-size creature used to carry heavy loads. According to the "Star Wars" web resource Wookieepedia, the animals are native to Tatooine. As a biologist, Spana couldn't help but wonder how such a creature could evolve on an unlikely world.

Spana said he looked for plants in the original film, "Star Wars: Episode IV - A New Hope," before the computer-generated-imagery effects were added. He found none. This led him to speculate that perhaps the banthas feed differently than one might expect. He pointed out that the desert world clearly has enough moisture for farmers, such as Luke's uncle, to thrive. Perhaps the banthas could eat algae that might grow in the planet's sand, Spana speculated.

A similar line of thought could apply to the tauntauns found on Hoth, listed as native to that ice world by Wookieepedia. Spana said that lichens are also supposed to be native to the ice planet.

"With a good food chain, you end up with tauntauns and enough wampas to eat them," Spana said.