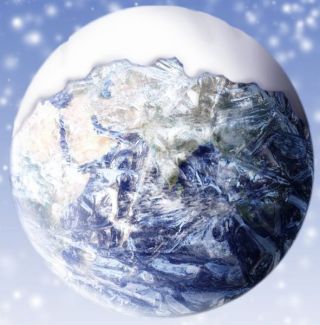 Three times in Earth's history, ice has covered the majority of the planet.
(Image: © MIT)

During vast ice ages millions of years ago, sheets of glaciers stretched from the poles almost to the equator, covering the Earth in a frozen skin. Conditions on the "snowball Earth," as scientists refer to it, made the planet a completely different place.

"We're essentially talking about another world," said Linda Sohl of the NASA Goddard Institute for Space Studies in New York.

In May, Sohl spoke with a small group at a lunchtime seminar, later posted online, about the evolution of the understanding of the snowball Earth and how it has changed as technology has improved. [50 Amazing Facts About Earth]

By the early 1990s, scientists had found several unusual features that indicated something chilling had happened in the past. Glacial deposits of similar ages appeared on almost every continent. Evidence revealed that capped carbonates — limestone overlays formed by the ocean — lying on top of the glacial deposits had formed where they were found, rather than having migrated south from higher latitudes.

"There had been this growing consensus that we'd had some terrible ice ages back in the past," Sohl said.

These features appeared at three different times in Earth's history, at 750 million, 635 million, and 580 million years ago.

"In a snowball event, the pulse of glaciers seems to reach a tipping point for some reason, and the whole system goes into a snowball." Instead of retracting, the glaciers creep farther south.

Temperatures on a snowball Earth are estimated to have reached minus 58 degrees Fahrenheit (minus 50 degrees Celsius). As the ice spread, more heat was reflected back into space rather than absorbed by the planet, dropping temperatures down in a runaway effect that sped the formation of ice.

"If you can think of continent-size ice sheetssitting where Saudi Arabia is right now, that will give you an idea of how cold the environment seemed to be," Sohl said. [Gallery: Awe-Inspiring Glaciers]

The world remained almost completely frozen over during each of the three periods for around 10 million years before warming again. Scientists still aren't certain what caused temperatures to rise again, but volcanic activity is a strong suspect. Many rocks absorb carbon dioxide, but in a snowball scenario such formations would be covered, allowing the atmosphere-heating molecule to build up to a point where global warming could melt the ice.

First proposed in 1992 by Joseph Kirschivink at the California Institute of Technology, the idea of an icy Earth lay dormant for six years until Harvard colleague Paul Hoffman published an article envisioning a world with a totally frozen ocean.

But an Earth where the water was 100 percent solid was a hard sell to some. At a workshop in Switzerland in the summer of 2006, 65 scientists — geologists, biologists, planet modelers and those in other fields — came together to discuss the possibilities and problems with such a world.

"We spent a week thrashing through a bunch of things," Sohl said.

Ultimately, the evidence seemed against a completely ice-covered world. Biologists pointed out that a frozen ocean would block light, which should have resulted in mass extinctions that don't show up in the fossil record. Geologists raised the issue that the proposed shutdown of the water cycle was not compatible with evidence. Sohl felt that most people left the conference thinking that the oceans never froze completely.

"The alternative is that you have a slush ball," Sohl said. "Yes, there was a really bad ice age, but we had lots of open ocean."

"A slush ball is sort of a halfway scenario where, instead of a total 'white out,' there are gaps in the ice with open water," Stevenson said.

Sohl describes a world where the heat is concentrated around the equator, leaving a band of liquid water where life could survive. [Wipe Out: History's Most Mysterious Extinctions]

Computer simulations are limited by the technology that ran them, and programs have come a long way in 15 years.

"Earlier models were more restricted by the computers they ran on, and so when they approximated the real world, those approximations were quite crude," Gavin Schmidt told Astrobiology Magazineby email. Schmidt leads the program that developed and maintains the GISS-E2 simulations, a climate model program that Sohl used to simulate the conditions of a near-frozen Earth. GISS-E2 has a variety of configurations with technical differentiations.

Today's programs can break things into smaller pieces and work with more details than the programs that modeled the first ideas of icy Earths.

"The earliest models dealt mainly with the lower atmosphere; now they include the ocean, sea ice, land surfaces, the carbon cycle, aerosols, atmospheric composition, the stratosphere and above, and so on," Schmidt said.

The first versions of GISS-E2 were developed in the early 1980s, but the program has been updated and tweaked a number of times with the help of a variety of people.

"It is very much a group effort, including oceanographers, meteorologists, mathematicians, computer scientists, and others," Schmidt said.

Climate models such as GISS-E2 can give scientists not only a view of Earth's possible past, but can also provide peeks into the future. Upcoming changes will also help the simulation to have greater flexibility, allowing it to be used for other planets.

As part of the May seminar, Sohl presented information about her current ongoing research into the two older icy periods. Using the more modern programs, she has engaged in rerunning simulations her team originally performed in the mid-1990s. With more experiments to perform, the recent research has not yet been subject to peer review or publication.

In both sets of experiments, the land was barren. The presence or absence of plants affects the reflectivity, or albedo, of a planet, which in turn feeds into how fast it heats up.

"Plants on land didn't show up until about 460 million years ago," Sohl said. "At best, there might have been some lichens or something like that on land, but that's really controversial."

The original experiment assumed standard desert conditions, but for the modern version, the scientists used a spot in the barren Gobi desert as an example of the proportions that could occur on a desolate early Earth.

Both projects simulated 60 years, at which point there were no more changes. Today, a simulation of that time frame lasts 12 hours; the original run-through lasted far longer.

Sohl discussed seven experiments with the group. The first was a basic control run, using preindustrial conditions. She also ran three simulations each for the two glacial intervals, changing the brightness, or luminosity, of the sun. Early in the history of the solar system, the sun was dimmer, which would also have affected the development of the snowball Earth.

In the original program, land masses were collapsed into a Pangaea supercontinent state, but for today's experiments the team decided that relocating the continents didn't have a significant effect on changing the planet's albedo. But leaving the world as is created a number of nooks and crannies for ice to pile up in, slowing the program down. Sohl said that future runs would contain a simplified topography.

Scientists don't know exactly what triggers the tipping point for a snowball Earth. One surprising result of Sohl's recent simulations was that extreme conditions weren't a requirement. A snowball Earth was created using conditions from before the relatively recent Industrial Age.

Another shock was the similarity of the results for the younger ice age even when the initial conditions were changed. Simulations with the solar luminosity set to the maximum suspected levels while the carbon dioxide levels were minimized produced comparable conditions to the sun shining at today's brightness.

"I was not prepared for these runs to be so similar to each other at this point," Sohl said.

Going forward, Sohl hopes to investigate other modifications that E2-R will allow, including changing the length of the days to the 21.9 hours it once took the Earth to turn on its axis.  As technology allows climate models to account for a wider range of variables, scientists should be able to better understand the driving forces that created and maintained a slushy snowball planet.

But if the Earth has become a giant ice block three times, could it happen again?

"I don't think they would happen again during human existence," Stevenson said.