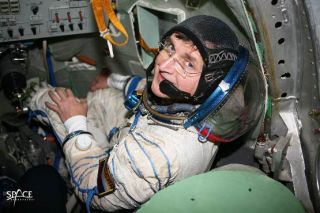 U.S. entrepreneur CharlesSimonyi has a brand new suit, and it comes with a pretty sweet ride.

TheHungary-born American software developer is ecstatic about his new Russian-builtSokolspacesuit, a must-have item for his planned April 7 launch towards the International SpaceStation (ISS).

“Just beingin my own spacesuit that I will be able to keep after the flight was really anincredible experience,” Simonyi, 58, said this week as he headed from Moscow to Russia’sStar City cosmonaut training center to complete his preflighttraining [image].

Simonyi ispaying morethan $20 million to visit the ISS under a deal brokeredwith the Russian Federal Space Agency by the Virginia-based firm Space Adventures.He will become the fifth paying visitor to the ISS when he launches aboard aRussian-built Soyuz TMA-10 spacecraft with twoprofessional cosmonauts -- part of the station’s Expedition15 crew -- on 10-day spaceflight to the orbital laboratory.

He isdocumenting his spaceflight on his website www.charlesinspace.com with blogs,images, videos and a recently added children’s section -- dubbed Kids’ Space --to share his ISS-bound experience. (Simonyi’s initials Ch S personalize hisSokol spacesuit, and apparently can also stand for “clean spacesuit” in Russian,he writes).

“I have tosay that my hopes are more than fulfilled, both in terms of the training and interms of what I can communicate,” Simonyi, a former Microsoft softwaredeveloper and co-founder of Intentional Software Corp, told SPACE.com ina telephone interview.

Reachingspace has been a lifelong ambition for Simonyi, an experienced aircraft pilotwho, at age 13, representedhis native Hungary as a Junior Cosmonaut on a trip to Moscow in 1963.

“It hasbeen an amazing journey,” said Simonyi, who plans to participate in a series ofbiomedical experiments during his upcoming spaceflight.

Simonyi isreturning to Star City after a successful round of winter survival training, inwhich he and other cosmonauts tested their wits and learned the Russianequivalent of “Mayday, Mayday” (Terpim bedstvye, or “We are suffering adisaster,” he writes).

“Theybrought us into the forest where we had to live for two days and nights usingonly equipment that we found in the spacecraft,” Simonyi said [image].“Such as parachutes, nylon and parachute lines and seat liners.”

Simonyialso spent two hours tied fast to the customized seat liner while clad in hisspacesuit, and is gearing up to test the spacesuit in a vacuum chamber tomeasure its integrity.

“It will bean interesting experience,” Simonyi said of the test. “If anything goes wrong,it will be a disaster.”

But Simonyiremains steadfast in what he deems the most challenging chore of preflighttraining: taking a spin on a revolving chair designed to help prepare futurespaceflyers for the initial space sickness experienced in a weightlessenvironment [image].

“It wasjust unpleasant,” he told reporters this week. “I will probably have to do moreof it to train myself against space sickness.”

Simonyisaid he plans to perform additional weightlessness training aboard a Russianaircraft and participate in a series integrated simulations to rehearsein-flight activities [image].

A high point in Simonyi’s preflight training came from the guidance he’s received from BertalanFarkas, a cosmonaut who became Hungary’s first spaceflyer in 1980 during aneight-day Soyuz mission.

“We turnedout to be about the same age and we grew up at the same time and now he’shelping me tremendously with the preparations for the spaceflight,” Simonyisaid.

Simonyi isalso looking ahead to after his coming spaceflight, when he hopes to continueto share his experiences -- not to mention his Sokol spacesuit -- to helpbolster interest and support in private human spaceflight.

“I thinkthat it will definitely be on loan to some museum,” Simonyi said of hisspacesuit. “At the same time, I’d like to retain it for its sentimental valueand, from time to time, try it on.”