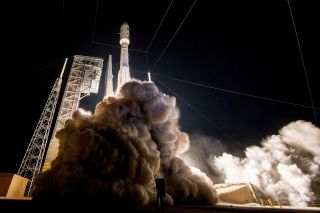 A powerful new satellite that will give forecasters their best-ever looks at storms and other severe weather has taken to the skies.

The GOES-R weather satellite lifted off from Florida's Cape Canaveral Air Force Station today (Nov. 19) at 6:42 p.m. EST (2342 GMT), riding a United Launch Alliance Atlas V rocket to orbit. The spectacular launch, which lit up the Florida evening sky, occurred about one hour later than planned due to issues with the rocket and launch range that were swiftly resolved.

GOES-R is the first of four new advanced weather satellites that are, somewhat confusingly, collectively known as GOES-R. The U.S. National Oceanic and Atmospheric Administration (NOAA), which manages the GOES-R program, is expecting big things from all four of these spacecraft. [See more GOES-R launch and mission photos]

"Without a doubt, GOES-R will revolutionize weather forecasting as we know it," Stephen Volz, assistant administrator for NOAA's Satellite and Information Services division, said during a pre-launch news conference on Thursday (Nov. 17).

"For weather forecasters, GOES-R will be similar to going from a black-and-white TV to super-high-definition TV," Volz added. "For the American public, that will mean faster, more accurate weather forecasts and warnings. That also will mean more lives saved and better environmental intelligence for state and local officials and all decision makers."

"What's so exciting is that we're going to be getting more data, more often, with much more detail and higher resolution," Roker told NASA's Stephanie Martin during live launch commentary today. The new GOES satellite will help improve not only weather forecasts but hurricane and tornado predictions as well, Roker added.

"If we can give people another 10, 15 or 20 minutes, we're talking about lives being saved," Roker said.

GOES-R is the 16th GOES (Geostationary Operational Environmental Satellite) craft to make it to space — and the satellite will be renamed GOES-16 when it reaches its final orbit, about two weeks from now. GOES satellites have been studying weather patterns from above for more than four decades; GOES-1 launched way back in October 1975. Two GOES craft, known as GOES-East and GOES-West based on their orbital positions, are doing this work now; a third GOES spacecraft is also aloft and serves as an on-orbit spare. [Earth from Space: See the Amazing NASA Photos]

The GOES satellites operate from geostationary orbit, about 22,300 miles (35,890 kilometers) above Earth's surface along the equator. At this altitude, their orbital speeds match the rotational speed of Earth, so the spacecraft can keep continuous tabs on the same stretch of land. In this case, that means the United States and much of the rest of the Western Hemisphere.

NOAA officials said that GOES-R's six-instrument suite represents a big upgrade from the equipment on GOES-East and GOES-West, which launched in 2006 and 2010, respectively.

GOES-R is also the first satellite to carry a lightning mapper to geostationary orbit. This instrument will photograph lightning activity throughout the Western Hemisphere about 200 times every second, NOAA officials said.

"When you compare all those [photos], you get a sense of where the severe weather is starting to really brew," Greg Mandt, GOES-R system program director at NOAA, said during the same news conference. "So with this information, the weather service will be able to make longer lead-time forecasts of severe weather and do it with much higher confidence, reducing false alarms."

GOES-R should also increase the accuracy of forecasts in the space-weather realm, Mandt added. One of the satellite's instruments will image the surface of the sun, for instance, while others will monitor the amount of energy coming from the star and the activity of charged particles zooming near Earth.

All of this information should give researchers a heads up about solar storms that could affect satellite navigation, power grids and other infrastructure, NOAA officials have said.

GOES-R won't start doing this work for a while; it's scheduled to begin operations about one year from now, after a lengthy checkout and validation phase. At that point, the satellite will take over for either GOES-East or GOES-West; it's unclear, at the moment, which spacecraft the newcomer will replace, Volz said.

When that happens, GOES-16 (as it will be called by that time) will take on the name of its predecessor. That'll be three name changes for the spacecraft in just 12 months' time: from GOES-R before launch to GOES-16 upon reaching its final orbit to GOES-East or -West upon the start of operations. (In case you were wondering, the current GOES-East and GOES-West were formerly called GOES-13 and GOES-15, respectively.)

GOES-R is designed to operate for 10 years, though it has enough fuel on board to last for 18 years, Volz said. The three GOES-R satellites yet to begin their missions — currently known as GOES-S, GOES-T and GOES-U — are scheduled to launch in 2018, 2019 and 2024, respectively.

This staggered slate should ensure that two satellites will continue collecting high-quality weather data as GOES-East and GOES-West through at least 2036, Mandt said.

The GOES-R program has a total budget of $10.8 billion through its entire life cycle, which runs from 2005 (when development began) through 2036. The project had already spent about $6.1 billion by the end of fiscal year 2015, NOAA officials have said.

The aerospace company Lockheed Martin is building the four GOES-R satellites. NOAA manages the GOES-R program, with assistance from NASA.