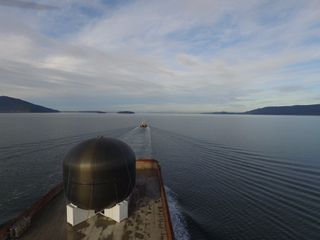 SpaceX tows the prototype carbon-fiber fuel tank for its crewed Mars spaceship out to sea for pressure tests in November 2016.
(Image: © SpaceX via Twitter)

SpaceX has successfully tested a prototype of the gigantic fuel tank the company is developing for its planned Mars spaceship, company representatives said.

SpaceX towed the full-size carbon-fiber tank — the largest such vessel ever produced, according to company founder and CEO Elon Musk — out to sea on a barge last week, then tested how the tank performed under pressure.

"Hit both of our pressure targets — next up will be full cryo[genic] testing," SpaceX wrote via Twitter, where the company posts as @SpaceX. [SpaceX's Mars Colony Ship in Images]

The enormous tank is a key component of SpaceX's Interplanetary Transport System (ITS), the reusable rocket-spaceship combo the company is developing to take people to and from Mars. Such tanks will house propellant for the Raptor engines that will power both the rocket and the spaceship.

The Raptor, which is also in development, will run on methane and liquid oxygen, both of which SpaceX plans to produce on Mars, Musk has said.

SpaceX aims to launch an uncrewed Mars mission as early as 2018, using the company's Falcon Heavy rocket and Dragon capsule. The Dragon will attempt to land on the Red Planet, to test out technologies that will help get the ITS spaceships down safely.

If everything goes well, the first ITS mission could launch as early as 2024, Musk has said. Many more missions could follow in short order; during the unveiling of the ITS architecture in September, Musk said he aims to help establish a million-person city on Mars within the next 50 to 100 years. (Each ITS spaceship will be capable of transporting 100 to 200 people at a time, Musk said.)

Mars colonization is a long-standing goal of Musk's. The billionaire has repeatedly said that he started SpaceX back in 2002 primarily to help make humanity a multiplanet species.