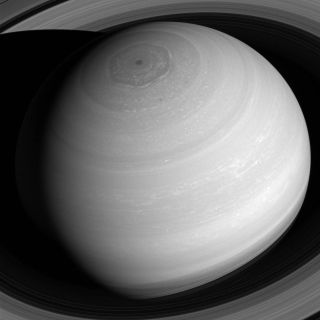 NASA's Cassini spacecraft captured this view of Saturn on July 16, 2016, from a distance of about 1 million miles (1.6 million kilometers).
(Image: © NASA/JPL-Caltech/Space Science Institute)

If you're trying to make the case that Saturn is the most beautiful planet in the solar system, this new photo could be Exhibit A.

The image, which was captured by NASA's Saturn-orbiting Cassini spacecraft, shows the gas giant's iconic rings, its complex, many-banded atmosphere and the bizarre six-sided vortex that swirls around the planet's north pole.

That vortex is about 20,000 miles (32,000 kilometers) wide and has been swirling for at least 35 years; researchers first spotted it after reviewing data gathered by NASA's Voyager 1 and Voyager 2 spacecraft during their Saturn flybys in 1980 and 1981, respectively.

Cassini took the newly released photo on July 16, when it was about 1 million miles (1.6 million km) from Saturn, NASA officials said. The image scale is 68 miles (110 km) per pixel.

The $3.2 billion Cassini-Huygens mission — a collaboration involving NASA, the European Space Agency and the Italian Space Agency — launched in 1997 and reached the Saturn system in July 2004. In December of that year, the Cassini mothership deployed a lander called Huygens, which touched down on the huge Saturn moon Titan in January 2005.

The orbiter, meanwhile, has continued to study the gas giant, its rings and moons for the past 12 years. Cassini has made many important discoveries; it found lakes of liquid hydrocarbons on Titan, for example, and spotted geysers of water ice blasting from the south polar region of the small, ice-covered moon Enceladus.

Subsequent observations suggest that this water is coming from a huge ocean of liquid water that sloshes beneath Enceladus' icy shell.

Cassini's time at Saturn is drawing to a close. In September 2017, the spacecraft will end its mission with an intentional death dive into the planet's thick atmosphere, in a maneuver designed to ensure that Cassini doesn't contaminate Titan or Enceladus, both of which could potentially host life, with microbes from Earth.