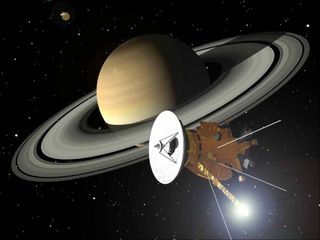 An artist's concept of the Cassini spacecraft at Saturn.
(Image: © NASA)

After orbiting Saturn and its moons for more than a decade, NASA's Cassini spacecraft has begun its final year of observing the system. The mission will culminate with a plunge into the ringed planet, and the spacecraft will eventually burn up inside Saturn's vast atmosphere. Along the way, Cassini will dart between the rings and the planet itself, collecting valuable data that will reveal the age of the rings and the composition of the planet.

"This is a brand-new mission," Cassini project scientist Linda Spilker, of NASA's Jet Propulsion Laboratory in California, said last week at the annual meeting of the American Astronomical Society's Division for Planetary Sciences in Pasadena, California.

"We're flying in a place that no spacecraft has ever flown before," Spilker said. "When you fly someplace new, you're really bound to make new discoveries." [Latest Saturn Photos From NASA's Cassini Orbiter]

Launched in 1997, Cassini arrived at the ringed planet in 2004. Over the past dozen years, it has revealed plumes and a subsurface ocean on Saturn's moon Enceladus, examined the methane lakes and seas of the moon Titan, studied the hexagon storm at Saturn's northern pole and probed the structure of the planet's iconic rings.

On April 22, 2017, the spacecraft will begin its final flyby of Titan, a Mercury-size moon. Titan's gravity will help curve the spacecraft's orbit and send it plunging through a 1,200-mile (2,000 kilometers) gap in the rings on April 26, according to Spilker. The gravitational boost from Titan "gives us an equivalent of about a third of the amount of fuel on board," Spilker said.

The Cassini team will spend the next day anticipating the "all clear" signal from the spacecraft. Although the gap in the rings is thought to be cleared out and fairly safe, nothing is certain, Spilker told Space.com.

"It's still an unknown place," she said.

Cassini should capture some incredible new views of the rings as it makes its daring swoop between them. Although the spacecraft will be moving at 74,000 mph (119,000 km/h), Spilker said it should be able to capture some breathtaking images.

She compared the journey to a car trip, noting that a passenger trying to take a picture directly out the side window would only capture blurry images due to the motion of the car. But peering forward at an angle allows the approaching vistas to be photographed clearly. Similarly, Cassini won't photograph the cosmic vistas directly beside it but will rely on carefully calculated angles to capture clear images, Spilker said.

Once inside the rings, Spilker said that Cassini will begin a new set of scientific investigations unlike any of its preceding accomplishments. As the probe flies over Saturn, it will measure the planet's gravity, providing the most accurate measurement to date of the gas giant's mass. By comparing that measurement with the combined mass of the planet and rings (which Cassini measured in previous years), scientists will be able to estimate the isolated mass of Saturn's rings.

The newly derived mass of the rings will point to their age. An ancient relic from the early solar system would be larger, consisting of giant bodies that have slowly broken down through collision and weathering. A less massive ring system, however, would suggest that the rings are younger and made of material from a single large planet "embryo" or comet, Spilker said.

In its final 22 orbits of Saturn, Cassini will also study the composition of the rings and take a closer look at the storms on the surface layers of the planet. Eventually, it will be time for its last trip around the planet that has been its home for so long.

On Sept. 11, 2017, Cassini will make its last targeted distant flyby of Titan, adjusting its path for its final journey. On Sept. 15, at 8 a.m. EDT (1200 GMT), the spacecraft will plunge into Saturn, the giant planet that has defined its lifetime.

The sacrificial plunge will guarantee that the spacecraft doesn't inadvertently crash down on Enceladus or Titan, two bodies thought of as potentially habitable.

As Cassini dives through the clouds, it will get a glimpse underneath the surface layers to reveal what is beneath. Saturn is a gas giant, so the spacecraft won't crash down on a hard surface. Instead, it will plunge through the cloud layers like a meteor, sending data back to Earth until it burns up in the atmosphere.

"For me, the Cassini grand finale is about so much more than the final plunge," Spilker said.

Spilker, who worked on the Voyager mission in the 1980s, has been part of the Cassini mission since the beginning. Although Cassini's instruments weren't selected until 1990, she said the idea for the mission hearkened back to Voyager 2's trip past the ringed planet and its satellites. The probe's images of Titan showed a planet cloaked in clouds.

"It was really that flyby of Titan — we couldn't see beneath the haze — that really got the conversation going," she said.

For Spilker, the 35-year journey has made the mission team feel like a second family. The most important part of that family is Cassini, which Spilker refers to as "she."

"It feels kind of like losing a close friend or family member," said Spilker, whose own children and grandchildren were born over the mission's time span.

At the same time, she feels like a proud parent who is cheering on a child who's achieved so much. Cassini has accomplished an incredible amount of science since it arrived at Saturn, and promises to accomplish even more in its final days.

"Think of it like the final chapter in one of the most incredible books you've ever read," Spilker said.