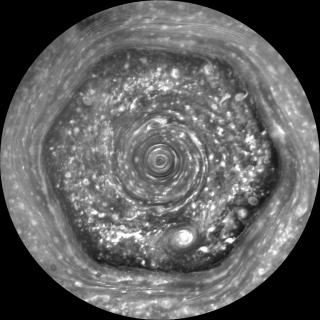 Hexagon observations made by Cassini in 2012, taken in wavelengths ranging from UV to IR.
(Image: © NASA/JPL-Caltech/SSI/Hampton University)

The huge, mysterious hexagon at Saturn's north pole may finally have an explanation.

The bizarre hexagonal cloud pattern was first discovered in 1988 by scientists reviewing data from NASA's Voyager flybys of Saturn in 1980 and 1981, but its existence was not confirmed until NASA's Cassini spacecraft observed the ringed planet up-close years later.

Nothing like the hexagon has ever been seen on any other world. The structure, which contains a churning storm at its center, is about 20,000 miles (32,000 kilometers) wide, and thermal images show that it reaches roughly 60 miles (100 km) down into Saturn's atmosphere. [Photos: Saturn's Weird Hexagonal Vortex]

Scientists have bandied about a number of explanations for the hexagon's origin. For instance, water swirling inside a bucket can generate whirlpools possessing holes with geometric shapes. However, there is of course no giant bucket on Saturn holding this gargantuan hexagon.

Voyager and Cassini did identify many features of this strange hexagon that could help explain how it formed. For example, the points of the hexagon rotate around its center at almost exactly the same rate Saturn rotates on its axis. Moreover, a jet stream air current, much like the ones seen on Earth, flows eastward at up to about 220 mph (360 km/h) on Saturn, on a path that appears to follow the hexagon's outline.

Now researchers have developed a model they suggest matches the hexagon's features better than previous attempts.

"With a very simple model, we have been able to match many of the observed properties of the hexagon," study lead author Raúl Morales-Juberías, a planetary scientist at the New Mexico Institute of Mining and Technology, told Space.com.

The scientists ran computer simulations of an eastward jet flowing in a curving path near Saturn's north pole. Small perturbations in the jet — the kind one might expect from jostling with other air currents — made it meander into a hexagonal shape. Moreover, this simulated hexagon spun around its center at speeds close to that of the real one.

The scenario that best fits Saturn's hexagon involves shallow jets at the cloud level, study team members said. Winds below the cloud level apparently help keep the shape of the hexagon sharp and control the rate at which the hexagon drifts.

Different models, such as ones that involve deeper winds or do not take winds lower down into account, do not match Saturn's hexagon well. For instance, they might result in a six-pointed star, or shapes with more or less than six points, or six pairs of storms arranged in a hexagonal pattern.

Morales-Juberías would now like to compare this new research with models from other research teams to see how these findings hold up. He and his colleagues detailed their findings in June in the journal Astrophysical Journal Letters.