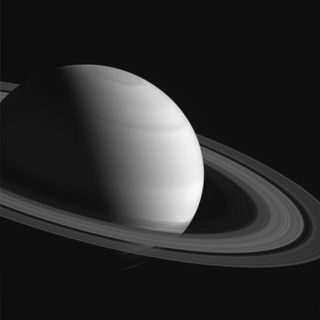 Shadow shrouds Saturn's southern hemisphere as the sun shines through its rings in this image taken by the orbiting Cassini spacecraft. The image was taken in red light with the spacecraft's wide-angle camera on March 19, 2016.
(Image: © NASA/JPL-Caltech/Space Science Institute)

A stunning new photo from NASA's Cassini spacecraft shows Saturn's dramatic profile, spotlighting how far it has tilted towards the sun since the craft arrived 12 years ago.

In the new Cassini photo, taken March 19, Saturn's north pole (and its strange, churning giant hexagon) is brightly lit, while its southern hemisphere is covered by the rings' shadow, which moves slowly as the planet's tilt toward the sun alters. The image was captured 1.7 million miles (2.7 million kilometers) from Saturn, and each pixel depicts 100 miles (160 km) of the planet.

"As Saturn's northern hemisphere summer approaches, the shadows of the rings creep ever southward across the planet," NASA officials said in a statement. That southward march can be seen in Cassini photos since its arrival in 2004.

When Cassini first arrived in Saturn's system after a seven-year journey from Earth, it captured images of the planet with ring shadows covering the planet's northern hemisphere.

By August 2009, during Saturn's equinox, the rings perfectly bisected the light of the sun, resulting in just a thin shadow across the planet's equator.

And now, Saturn tilts its northern hemisphere toward the sun, marking summer for that half of the planet. The Cassini spacecraft is nearing the end of its journey, and it will dive down into Saturn's atmosphere in September 2017, during the northern hemisphere's summer solstice, when that hemisphere tilts closest to the sun. (Yesterday,  (June 20,) was the summer solstice and longest day of the year for Earth's Northern Hemisphere.)

Cassini has accomplished a lot while exploring the Saturn system. It has sent a probe down into Saturn's largest moon, Titan, as well as cataloged more than 50 of Saturn's moons. Cassini found evidence of liquid water on the moon Enceladus and a lake of methane on Titan, and investigated the source of jet streams in Saturn's atmosphere.

Saturn takes 29 Earth years to circle the sun — so when Cassini finally completes its extended mission in 2017, it will have investigated the planet for about half of a Saturn year.