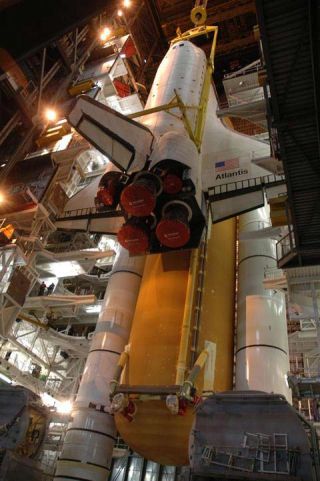 The overhead sling lowers the orbiter Atlantis next to the external tank and solid rocket boosters stacked on the mobile launcher platform (MLP) below on Feb. 7, 2007.
(Image: © NASA/Amanda Diller.)

NASAengineers have attached the shuttleAtlantis to its immense external fuel tank and twin rocket boosters,bringing the spacecraft one step closer to a Marchlaunch towards the InternationalSpace Station (ISS).

Teams of shuttleworkers are going over the multitude of electrical and mechanical connectionsbetween the 122-foot (37-meter) orbiter and its 15-story external tank, whichstand poised in launch position inside NASA's cavernous Vehicle AssemblyBuilding (VAB) at the Kennedy Space Center (KSC) in Florida [image].

NASAspokesperson George Diller told SPACE.com today that the standard seriesof engineering checks between Atlantis and its external tank, known as the shuttleinterface test, should be complete by Monday. The nearly 100-ton shuttle, whichrolled from its maintenance hangar to the VAB on Wednesday [image],is then slated to make the slow trek to NASA's Pad 39A launch site at 7:00 a.m.EST (1200 GMT) on Feb. 14, he added.

Built byBoeing, the nearly 45-foot (13-meter) integrated truss segments carry two solararrays that, when deployed, will have a wingspan of about 240 feet (73 meters).The element is a near mirror-image of the space station's Port3/Port 4 solar arrays installed by NASA's STS-115astronaut crew in September2006 and will balance out the orbital laboratory's current lopsided profile[image].

Boeingspokesperson Susan Wells told SPACE.com that the S3/S4 space stationtrusses are already packed away in a NASA cargo container, and will be hauledto the space agency's Pad 39A launch site soon to await Atlantis' arrival.

NASA's STS-117mission is the first of up to five plannedshuttle flights to continue ISS construction in 2007.