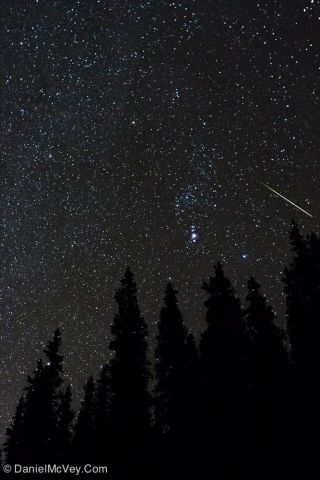 Astrophotographer Daniel McVey took this photo of an Orionid meteor in Summit County, Colo., on Oct. 21, 2012. The Orionids of 2016 peaked Oct. 20-21, but they may still appear bright in the sky in the days that follow.
(Image: © Daniel McVey)

The Orionid meteor shower may have peaked last night, but the fast, bright meteors will continue streaming across the sky in force for another night or two, according to a NASA expert.

The meteors are remnants left in the wake of Halley's Comet, and skywatchers can expect to see 15-20 meteors per hour during the height of the shower.

"A good thing about the Orionids is that they tend to either have a double peak or a flat maximum, which means that you can see good Orionid rates for two to three nights," NASA meteor expert Bill Cooke told Space.com for our 2016 Orionids guide. "So if you miss it one night, you can go out the next night and see them."  [Orionid Meteor Shower 2016: When, Where & How to See It]

In fact, while the bright moon may block out some of the shower's peak this year, Earth's natural satellite is currently waning — so it should put out less light each night and potentially reveal more of the meteors. The shower should continue until Nov. 7, although the meteors' frequency will continue to diminish.

Viewers in all parts of the world can see the Orionids; the meteors appear to emanate from near the constellation Orion, which appears in the southwest sky for Northern Hemisphere dwellers and the northwestern sky for viewers in the Southern Hemisphere. To see the meteors, though, don't look directly at that spot, called the shower's radiant. Instead, sit back where you can see more of the sky, because while the streaks will appear to be flying away from the radiant, they can appear anywhere. In fact, Cooke said, meteors with longer tails are likely to appear farther away from that spot.

This is extra relevant for the Orionids, which shine particularly bright and whiz quickly across the sky, making them striking but easy to miss. They fly at a relative speed of about 148,000 mph (238,000 km/h).

The shower makes an appearance every year in October and November as Earth passes through the trail of debris left behind by Halley's Comet. Although the comet travels near Earth only once every 75 years, Earth crosses Halley's trail twice a year (causing the Orionids and May's Eta Aquarids).

To see the meteors, prepare to be outside for a long time. Get comfortable in the darkest spot you can find, and allow at least a half hour for your eyes to adjust to the dark. Watching the sky with the naked eye works better than using binoculars or a telescope, because you're able to see more of the sky and catch sight of the quickly streaking meteors.