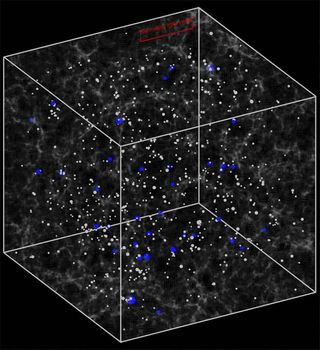 The illustration shows the distribution of dark matter, massive halos, and luminous quasars in a simulation of the early universe, shown 1.6 billion years after the Big Bang. Gray-colored filamentary structure shows the distribution of dark matter; small white circles mark concentrated "halos" of dark matter more massive than 3 trillion times the mass of the sun; larger, blue circles mark the most massive halos, more than 7 trillion times of the sun, which host the most luminous quasars. The strong clustering of the quasars in the SDSS sample demonstrates that they reside in these rare, very massive halos. The box shown is 360 million light years across.
(Image: © Paul Bode and Yue Shen, Princeton University)

A new cosmic map confirms a close relationship between galaxies with supermassive black holes at their centers and the distribution of the invisible dark matter in the early universe.

Quasars are incredibly bright objects located at the center of galaxies and thought to be powered by gas falling into enormous black holes up to a billion times the mass of the sun. Although smaller than our solar system, a single quasar can outshine an entire galaxy of a hundred billion stars.

Compared to normal galaxies, quasars are extremely rare, about 200 million light years or more apart from one another on average. The new map was created using the Sloan Digital Sky Survey (SDSS-II) and includes more than 4,000 quasars, some as far as 11 billion light years away. The universe is estimated to be only about 14 billion years old.

The new map [image] reveals a close relationship between quasars and dark matter, as predicted from theory.

The new map will be detailed in an upcoming issue of The Astronomical Journal.

Dark matter is a mysterious hypothetical substance that does not interact with light photons and is thus invisible to current detection instruments. Scientists estimate that only about one-sixth of the matter in the universe is visible, while the rest is dark matter.

Current theories predict that matter-both the dark and visible variety-was smoothly distributed in the early universe, and that over time, it became more concentrated.

"Dark matter halos are a dime a dozen in the present day universe, but in the young universe, they were really quite rare," Strauss said.

It was in these rare spots of concentrated dark matter that the first massive galaxies and quasars formed.

"The quasars themselves are sort of a signpost to those very massive [dark matter] halos, and our work makes that a little more clear," Strauss told SPACE.com.

Avi Loeb, an astronomer at Harvard University who was not involved in the study, says the new findings could help answer a major question in cosmology: How did the first quasars form at all?

"How did black holes grow to a billion times the mass of the sun when the universe was only a tenth of its current age?" Loeb said. "The SDSS measurements will help us answer this question."