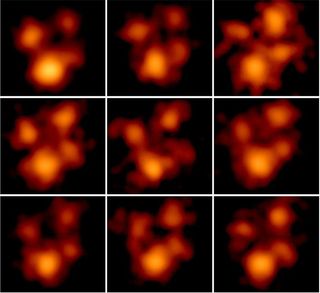 A mosaic of X-ray images of the quasar Q2237+0305, magnified by a gravitational lens. The bright spots are four magnified images of the same quasar, which change in brightness over time.
(Image: © Courtesy of Ohio State University)

Astronomershave looked under the hoods of quasars, the brightest objects in the universe,and found some of the best evidence yet for the blackholes that are thought to power them.

The newstudy, presented today at the meeting of the American Astronomical Society(AAS) High Energy Astrophysics Division in San Francisco, lends furtherconfirmation to the idea that quasars are anchored by supermassive black holesand the flattened disks of material spiraling into them.

Astronomershave puzzled over quasarsfor decades before deciding each is a very active and developing galaxy mostlikely containing supermassive blackholes that formed billions of years ago. This cosmic yin-yang between thedarkest and brightest space objects has made understanding quasars difficult.

Black holesare so dense that nothing, not even light, can escape their gravitationalclutches, making them impossible to observe directly. And even though quasars, or quasi-stellar radio sources, are the universe's most powerfulsources of constant light, they are billions of light-years away. So even with the mostpowerful telescopes they appear as pinpoints of light. On top of that, the dustand gas lit up by a quasar makes seeing inside one a great challenge.

Theresearchers led by Xinyu Dai and Christopher Kochanek of Ohio State Universitywere only able to view the interior structures of the two quasars, namedRXJ1131-1231 and Q2237+0305, when a galaxy lined up between them and the Earth,magnifying their light--a phenomenon called gravitationalmicrolensing. Like a Sumo wrestler rolling over and deforming a soft mat,the weighty galaxy dented, or curved, the fabric of space-time, rerouting andin this case focusing light from the quasars behind it.

"Luckilyfor us, sometimes stars and galaxies act as very high-resolutiontelescopes," Kochanek said. "Now we're not just looking at a quasar,we're probing the very inside of a quasar and getting down to where the blackhole is."

With NASA'sChandra X-Ray Observatory, coupled with measurements from optical telescopes,the astronomers were able to measure the size of the so-called accretion diskinside each quasar, one of which spanned about 14 astronomical units (AU),where one AU is the distance from Earth to the sun.

"It's thefirst time anyone has measured the size of the disk around one of these blackholes," Kochanek told SPACE.com.

The diskseach surrounded an area that was emitting X-rays, a telltale sign that thematerial at the disk's center is being heated up as it speeds up prior tofalling into the blackhole.

Theastronomers are currently studying 20 such lensed quasars, and they hope togather X-ray data on all of them.