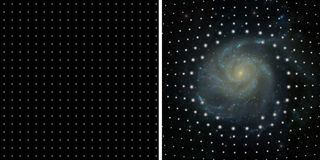 A grid of points (see expanded image), representing background quasars, is gravitationally lensed by a foreground galaxy. The magnitude of the effect is exaggerated to make it apparent to the eye.
(Image: © Joerg Colberg, Ryan Scranton, Robert Lupton, SDSS)

A survey of 13 million galaxies and 200,000 quasars uses Einstein's theory of gravity to confirm a dark side of the universe.

Light traveling billions of light years to reach us is bent by clumps of matter along its path. Albert Einstein, who is being remembered this year for his amazing scientific output from 1905, predicted this so-called gravitational lensing when he characterized gravity as the curvature of space-time.

Earlier attempts to measure the lensing of far-away quasars had failed to see an effect that matched the standard picture from cosmology - raising some doubts about the validity of that model. But an analysis of the Sloan Digital Sky Survey, released last week, puts an end to the controversy.

"This is exactly what is expected from gravitational lensing and the cosmological model," said Brice Menard of the Institute for Advanced Study, where Einstein worked until his death in 1955.

Specifically, these new results confirm that galaxies - which act as lenses for more distant quasars - are more than meets the eye. The light-emitting matter in the galaxies is not enough to account for their magnifying power. There has to be more mass in the form of dark matter.

"If there was no dark matter, [the researchers] wouldn't have measured the signal they saw," said Josh Frieman of the University of Chicago, who was not involved in the analysis.

According to the most recent estimates, there is about ten times more dark matter than the "normal" matter that makes up stars, gas, and planets.

In the future, Menard and his colleagues plan to use the gravitational lensing signal to map out exactly how the dark matter is distributed around galaxies.

One way to understand gravitational lensing is to picture space as a rubber sheet. The sheet is deformed, or curved, when something heavy, like a bowling ball, is placed on it. If something passes near by - like a rolling marble - the trajectory is deflected, or bent.

This deflection works on light as well. If we look towards a massive object, the light coming from behind may be focused or spread out. In this way, galaxies, which weigh billions of times our Sun, distort the background universe.

The most obvious examples of gravitational lensing are when the light from a quasar is broken up into multiple images, or when the shape of a galaxy is stretched out. These cases are deemed strong lensing.

"Strong lensing is very impressive - it's clear that something is going on," said Ryan Scranton of the University of Pittsburgh.

But Scranton, along with Menard and others, have sifted through the Sloan survey looking for a much more subtle distortion called weak lensing.

"Weak lensing is not as dramatic, but you see it everywhere you look," Scranton told Space.com. "Ultimately, it is more important for doing cosmology."

It is not possible to look at one object and say weak lensing is occurring. It has to be done statistically on a large sample of objects.

Weak lensing of galaxies by galaxies - called cosmic shear - was detected five years ago. The recent findings are for cosmic magnification, or the weak lensing of quasars by galaxies. This has been harder to detect, partly because there was not a large uniform sample of quasars until the Sloan survey came out.

For over six years, the Sloan survey has been methodically mapping out large tracts of the cosmos - identifying stars, galaxies, and quasars.

A quasar is a somewhat rare type of galaxy, which is made extremely bright by hot gas falling onto a huge central black hole. Quasars are often identified by their radio or X-ray emissions, but Scranton and his colleagues used a new method for picking them out in visible light using Sloan's five separate filters.

"The key to it is that we are taking full advantage of the information that is there," Scranton said. "We increased the number of quasars by a factor of four or five."

This detection is made difficult by the fact that weak lensing causes two effects - magnification and shifting - that tend to cancel each other out.

When a galaxy sits near the line of sight to distant quasars, two things happen (see accompanying figure). The quasars are magnified to look brighter, and their apparent positions in the sky are shifted.

The magnification allows astronomers to see quasars that they would not have been able to see otherwise. In general, this increases the number of quasars visible around a foreground galaxy.

However, the shifting has the opposite consequence. It moves the apparent position of objects away from the lens - decreasing the number of quasars around a foreground galaxy.

"The two effects compete," Frieman said. "One wins some of the time, the other wins the rest of the time."

The net change in the number of quasars is less than one percent. With the large data set from Sloan, the research team observed an excess of bright quasars - but a deficit of faint quasars - in close vicinity of galaxy lenses. This matches predictions.

"Nobody before was able to report both the excess and deficit," Menard said. "Apart from gravitational lensing, it is difficult to get both things to happen."

This research is described in a paper accepted for publication in The Astrophysical Journal.