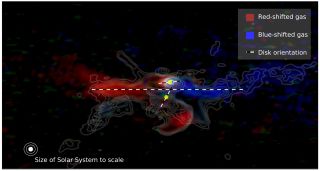 ALMA observations of the gas around the two stars called IRS 43. The colous are shown as an illustration. The gas moves in orbit around the stars, which are highlighted in yellow. The gas that’s moving away from us is represented by red, while the gas moving toward us is shown in blue. The positions of the disks are indicated by the dotted lines.
(Image: © Christian Brinch, NBI, KU)

Well, this is weird.

Three distinct planet-forming disks, all of which are misaligned with one another, revolve around two newborn stars in a binary system about 400 light-years from Earth, a new study reports.

"The two newly formed stars are both the size of our sun, and they each have a rotating disk of gas and dust similar to the size of our solar system," study lead author Christian Brinch, an assistant professor at the Niels Bohr Institute at the University of Copenhagen, said in a statement. ['Tatooine' Solar System: 2 Alien Planets with Twin Suns Found (Gallery)]

"In addition, they have a shared disk that is much larger and crosses over the other two disks," Brinch added. "All three disks are staggered, and this breaks with everything we have seen so far."

Solar systems form from huge clouds of gas and dust. Most of this material gets incorporated into the central star or stars (about half of all stars in the Milky Way galaxy are part of a binary system); the rest coalesces into a rotating disk that eventually gives rise to orbiting planets.

Each newborn star generally has one such disk — though the new study shows that the situation can be more complicated than that.

Radiation from these stars heats up the gas in the surrounding planet-forming disks, causing the emission of infrared and microwave light. ALMA detected these emissions, allowing the research team to discover that IRS 43 hosts not two but three disks. In addition, the researchers were able to discern the disks' movement and their orientation relative to each other. (It's unclear if planets are already forming within the disks, team members said.)

The researchers plan to perform computer simulations to better understand why the disks are skewed like this, instead of all lying flat in the same plane with one another.

"Perhaps it is a dynamic process of formation, which happens often and then it corrects itself later on," co-author Jes Jørgensen, an associate professor at the Niels Bohr Institute and the Center for Star and Planet Formation at the University of Copenhagen, said in the same statement.

"We will try to clarify this," Jørgensen added. "We will also apply for more observation time on the ALMA telescope to study the planet-forming disks in even higher resolution to get more detailed information about their chemical composition."