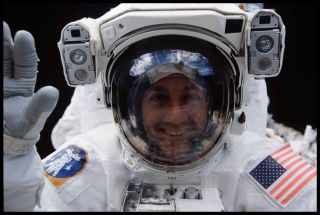 NASA astronaut Mike Massimino pauses for a photo in his spacesuit during a spacewalk outside the space shuttle Columbia on March 5, 2002. Massimino's two shuttle missions were focused on repairing the Hubble Space Telescope.
(Image: © NASA)

Former NASA astronaut Mike Massimino describes his path to space and two shuttle missions in a new book that follows his journey from a weak-eyed kid, to a research engineer, to — finally — an outer-space repairman of the Hubble Space Telescope.

"Spaceman" (Crown Archetype, 2016) captures the camaraderie of the space community, the utter coolness of space, a spaceman's training and a personal look into how it feels to become an astronaut. (Plus the long slog of trying to get good enough eyesight to be accepted into the space program!)

Space.com sat down with Massimino to discuss the book, his thoughts on commercial spaceflight, how to become an astronaut and his favorite space hardware. [Read an excerpt of "Spaceman" here.]

Space.com: Why did you set out to write a book about your experiences?

Mike Massimino: I seem to enjoy, a little more than my colleagues [do], the opportunity to share stories about how cool it is to be an astronaut. I think it's the greatest job in the world, and the more ways you can let people know about it and the stories that each one of us has — we all came different ways to get there, and it really is a dream come true. It's the kind of job where you dream about it, and you think it might be impossible because it's so difficult to get in there, and sometimes it works out. And that alone is great — it's a wonderful story.

What I really wanted to share, and I think maybe what they might have saw in it when we first started, was to try to make it really personal and talk about the emotion, the feelings behind it. You could talk about all the technical part of it matter-of-factly, but it's the personal experience, the relationships and the emotions going into it that we also wanted to share.

Space.com: Were you surprised by anything that made it into the book?

There was a theme that came out in the book, when I was talking to my co-writer [Tanner Colby] about it. It kind of came down to three messages; two of them I expected. One of them was pursuing a dream, and never giving up. That was a theme that I thought was worth telling; when I speak to students around the country, I talk about the importance of that.

The second theme was how cool it is to fly in space. It is amazing. You leave the planet, and you do this work in a spacesuit, and you view what it looks like, and you see these just utterly indescribable, amazing things — what that whole experience is, how cool it is to be an astronaut.

The third thing that came out of it was this story of the importance of public service, service to others. I wasn't sure that was going to be a part of it, because I always felt like what I was doing was just having fun. … But I think there was more of that, because when we wrote the book, we started from the beginning of me growing up, and I talked about my dad working for the New York City fire department, and having that sense of wanting to do something in some sort of public service or service to others — how important it was to do things to hopefully contribute to the betterment of the world. To me, that was a bit of a revelation about me that I didn't really think much about before writing the book.

Space.com: Was anything cut from the book you were sad to see go?

Massimino: What I consider to be my funniest stories got chopped, because they just didn't work. The stories that you might tell your friends or tell in front of an audience, even — the better ones were a little bit too long. If I ever get a chance to write a second book, my second book is going to be "A Funny Thing Happened to Me on the Way to the Spaceship." Because all my funny stories got cut. [Editor's note: There are quite a few funny stories still in the book.]

You can hear Massimino read the beginning of his book in an excerpt from the audiobook, available on Audible:

Space.com: You got to fly to space twice and work on the Hubble Space Telescope, which you've called the greatest scientific instrument ever built. What are your thoughts on NASA's current slate of projects?

Massimino: You heard about the discovery Hubble just made — water on the moon of Europa. That [discovery] was [made with] STIS [the Space Telescope Imaging Spectrograph], the instrument I had to pull the handrail off of, to fix it. I'm really excited about that; very grateful we were able to fix that instrument. [The Hubble Space Telescope: A 25th Anniversary Photo Celebration]

But your question was, in addition to Hubble, what NASA's doing now. I think we're in a different phase now. I think NASA is still doing some great things, but it can't do all the great things in space, and I think that's OK. It's getting help, hopefully, from these commercial companies like SpaceX and Boeing with its commercial spacecraft, along with the SpaceX vehicle for commercial crew, but also the Richard Branson Virgin Galactic model and Jeff Bezos. I really hope he [Bezos] is going to be successful with his Blue Origin company and the New Shepard spacecraft.

[SpaceX founder and CEO] Elon Musk wants to send people to Mars, and that's what we need. And I think NASA just can't afford to do all these things on its own. It's not like when I was a kid, going to Apollo, where they had a huge national goal that a lot of resources were devoted to. We just can't afford to do that anymore. It's not going to happen. … A budget from our tax dollars that is used wisely can do some great things, but it's not going to be on the order of what we did with Apollo anymore, maybe not on the order of what we did with the shuttle. Certainly it's something that could be great — and is — but it's not just NASA anymore.

I expect some great things to be coming out of commercial space companies in years to come.

Space.com: Would you go to space again, maybe on one of those commercial flights?

Massimino: Yeah, I'd love to do that. I don't know if anybody's going to do any asking; I don't think I could afford the ticket. But yeah, I would love the opportunity to fly into space again, absolutely.

Space.com: Would you go live on Mars?

Massimino: I think Elon Musk's plan was to leave you there, right? I want to get on one and come back. I'm too used to television and pizza.

When I got my travel orders to go to space, because it's a government operation, it said, "From Kennedy Space Center to low Earth orbit and return." To me, the "return" was very important … I'd love to go for a visit, but I would want to come back — or at least have the plan to come back.

Massimino: My favorite spaceship of all time is the shuttle. I think it's the coolest spaceship we've ever had, and will have for some time. It's amazing. I remember looking out the window toward the end of my second flight on Atlantis, looking out the window at the nose — "If I was outside and I could, I would give it a kiss," I was thinking. Because it was such a wonderful spaceship. The space shuttle was able to launch into space, and protected you and got you to orbit, and then it allows you to live there and work there and got you home safely. That was the plan — it didn't always work that way, but that's what it could do. And it landed on the runway like an airplane, like a glider. [Photos: NASA's Last Mission to the Hubble Space Telescope]

It was fairly complicated and expensive, which is eventually why it had to be replaced. But while it did its thing, it was great. That's my favorite spaceship, but it's also the only one I've ever been on. I'm very biased that way.

And I guess my favorite piece of equipment is the spacesuit itself that we do our spacewalks in. It is a miracle that that thing works. It is your own little spaceship. It keeps you comfy; it allows you to do your work; it protects you. It's used over and over again — it's been used for many years, refurbished and used again.

The repair on the Hubble that I did — on the STIS instrument, in particular — required a lot of dexterity and being able to move and work and be comfortable in that suit for a long time. But at the same time, it protected me from the harshness of space. I got to know that spacesuit intimately well, and it's just a miraculous piece of machinery.

Space.com: I'm sure everyone asks you this, but do you have any advice for people who want to be astronauts?

Massimino: At least for the foreseeable future, in order to be an astronaut, it requires some sort of technical background or training. And I think that's going to change; I think there's going to be all different disciplines that are nontechnical that are going to be needed as well. We certainly need them in the space program. But as far as flying, it's still, right now, people who have some sort of technical background. But that is wide: Just the people I've flown with gives you a pretty good idea. I've flown with engineers of all types. I've flown with test pilots, military people. I've flown with an oceanographer, Megan McArthur; a geologist, Drew Feustel; an astrophysicist, John Grunsfeld; and a veterinarian, Rick Linnehan. [Astronaut Drew Feustel Talks Orion and the Future of Space Exploration (Video)]

And don't give up, either. That's the other thing. There are plenty of people that applied and got rejected and gave up — and if they didn't, they probably would have got my spot. So I'm glad they gave up. But I wouldn't recommend it for anybody; giving up is not a good idea.