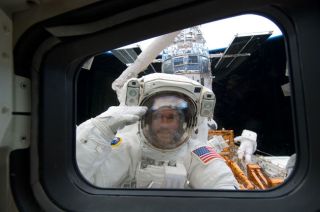 While standing on the end of Atlantis' remote manipulator system arm, astronaut Michael Good, STS-125 mission specialist and USAF colonel, pays tribute to his commander and crewmates with a military-style salute. Astronaut Mike Massimino works in the background at right.
(Image: © NASA.)

HOUSTON - Two spacewalking astronauts ripped a handrail out of the Hubble Space Telescope with their own brute strength on Sunday in a last-ditch effort to move it clear of an old broken instrument they were trying to fix.

It was Plan C for NASA and not Mission Control's first choice for Atlantis astronauts Michael Massimino and Michael Good as they worked on the 19-year-old Hubble. The spacewalkers were trying to fix a spectrograph that was never designed to be repaired in space. But they had to remove the handrail just to reach their work site.

The spacewalkers eventually wrenched the handrail free and can finally reach the broken spectrograph at the heart of today's repair. But then a power tool failed, sending them scrambling for a spare.

"Oh, for Pete's sake!" Massimino exclaimed. The spacewalk was expected to run 6 1/2 hours, and will likely be extended by hours.

After two separate attempts to unscrew the bolt out with different custom-made tools -- Plans A and B -- Mission Control finally gave Massimino the go ahead to just rip the handrail off, while taking care not to lose any of the broken pieces. The handrail was attached to a cover plate with four bolts, three of which were easily removed. It was the last bolt that stuck fast, apparently because it was stripped.

"Make sure you're ready," said astronaut Andrew Feustel, who was coaching the spacewalkers from inside Atlantis.

Mission Control warned the astronauts that it would take some serious strength to bend the handrail and shear off the stuck bolt. Massimino braced himself, then let loose. Mission Control was essentially blind as Atlantis passed out of live video range.

"There we go! I think I got it," Massimino said. "I don't think we even scattered any debris."

The astronauts and Mission Control cheered.

"Awesome job," Mission Control radioed the astronauts. "We?re back in with the regular scheduled program -- wonderful."

But first, Massimino asked for a well-deserved break.

It was after they removed the handrail that a vital miniature power tool failed. An exasperated Massimino had to go grab a spare. He later asked how things were going inside Atlantis.

"It's a real nail-biter, buddy," said astronaut Andrew Feustel, who was coaching the spacewalkers from inside Atlantis.

With the handrail clear and the spare power tool, Massimino and Good will finally be press ahead with today's planned repair of Hubble's broken Space Telescope Imaging Spectrograph, a versatile instrument that can detect supermassive black holes and the chemical makeup of the atmosphere around distant alien planets.

The spacewalk is the fourth of five challenging spacewalks of Atlantis' mission to overhaul Hubble for the fifth and final time. After the last spacewalk on Monday, there will be no more chances to fix the iconic space telescope since NASA is retiring its space shuttle fleet next year.

The spectrograph is designed to split light into individual wavelengths in order to study objects in space, but it an also be used as a camera. That dual purpose makes it unique among Hubble's instruments. It was installed in 1997 and suffered a power failure in 2004.

Massimino and Good must remove 117 small screws from an access cover -- now that the handrail is removed -- and then pluck out a broken power supply circuit board. They will replace it with a new one, and then install a new cover plate. It is the second major repair of their mission. On Saturday, spacewalkers fixed Hubble's main camera.