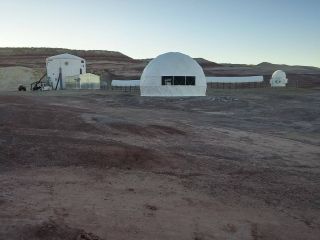 A recent view of the Mars Society's Mars Desert Research Station (MDRS) in the southern Utah desert. Seven explorers began an 80-day mission at the facility on Sept. 24, 2016.
(Image: © The Mars Society)

Seven explorers are about to embark upon an 80-day simulated mission to Mars.

On Saturday (Sept. 24), the crewmembers of the Mars 80 mission — who hail from France, Japan, Russia, Australia, India and Canada — will begin work at the Mars Desert Research Station (MDRS), a facility in the Utah desert run by the nonprofit Mars Society.

The team will conduct a campaign of geology, microbiology and paleontology research in the area, operating under many of the same pressures and constraints that real-life Mars pioneers would face. Crewmembers will also test out spacesuit technologies and other gear that could help humanity get a foothold on the Red Planet, Mars Society representatives said. [See photos from a two-week MDRS mission in 2014]

For example, the Mars 80 explorers will clean their clothes by exposing the garments to a vacuum environment, without using any water, soap or chemicals.

"Will the clothes feel and smell clean enough that morale will not be impacted by the degree of compromise that we're making?" said Mars Society President Robert Zubrin, the principal investigator of this "vacuum cleaner" experiment.

"If so, then this system could be employed on the space station very quickly, and on any ship going anywhere in space, and on a lunar base or anywhere," Zubrin added. "Who wants to use water and chemicals on a spacecraft for cleaning? And who wants to bring enough replacement clothes for a two-year mission, if you're not clean?"

Mars 80 is the first half of the larger Mars 160 mission. The second half will take place next summer at the Mars Society's Flashline Mars Arctic Research Station (FMARS), on Devon Island in northern Canada. The same core crewmembers will carry out the same exploration campaign at FMARS that occurred at MDRS, in an attempt to gauge the usefulness of mock Mars missions at both locations, Zubrin said.

"If we can show that you can get comparable data in the desert as you can in the Arctic, then that means we can do extensive Mars analog research in the desert with very little penalty," he said, noting that operations at MDRS are at least 10 times cheaper than those at FMARS.

Mangeot, Murakami, Stepanova, Laroche, Clarke, Beattie and Srivastava will carry out the Mars 80 portion of the mission, with Mangeot serving as commander; Knightly and Rupert aren't part of the field crew. You can learn more about Mars 80 and the overall Mars 160 mission at the Mars Society's website: http://www.marssociety.org

The Mars Society has conducted more than 160 simulated Red Planet missions at MDRS over the past decade and a half, but the vast majority have been two-week efforts.