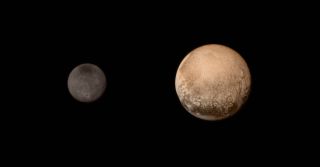 Pluto and its largest moon Charon are classified as a binary system because the central point of their orbits lies beyond Pluto's surface.
(Image: © NASA-JHUAPL-SWRI)

Astronomers may have found the first binary planets ever observed beyond our solar system.

The two objects straddle the dividing line between gas giants and odd "failed stars" known as brown dwarfs in terms of mass, researchers said. The newfound bodies are also similar to each other in size and age.

"They're probably brother and sister," Daniella Gagliuffi told Space.com. Gagliuffi, a graduate student at the University of California, San Diego, found the objects amid a cloud of stars about 65 light-years from Earth. [Gallery: The Strangest Alien Planets]

"It's a little incestuous," said Gagliuffi, who presented her research at the American Astronomical Society's summer meeting in San Diego in June.

The pair lie within a dense cluster of stars that would normally be expected to strip objects away from one another. However, observations suggest that the two objects are so close that interactions with other stars would instead push them closer together, Gagliuffi said.

Galaxies are filled with stars, but they also include faint drifting objects with characteristics that make their status debatable. Such objects can be classified either as planets or as failed stars, given a blurry dividing line between the two.

That's the case for the two objects Gagliuffi identified in a search for failed stars known as brown dwarfs. Gagliuffi sought brown dwarfs that could help her probe the lower boundary of what makes a star.

Unlike stars, brown dwarfs fail to fuse "normal" hydrogen in their interior. But these odd objects are apparently capable of fusing deuterium, or "heavy" hydrogen, a feat that kicks in when a body is around 13 times as massive as Jupiter.

The newfound pair weigh in at roughly 15 and 14 times the mass of Jupiter. But the error bars associated with those estimates are wide enough that they may actually be in the planetary range.

So, the twins could be a pair of planets dancing around a central point of mass (in which case they would be the history-making exoplanet binary), but they could also be a pair of brown dwarfs, or a brown dwarf hosting a massive gas giant planet.

To complicate the matter, both brown dwarfs and young gas giants produce light so weak that it is difficult to study their composition or differentiate them from one another.

And massive young planets produce heat from within, slowly cooling over their lifetimes. Gagliuffi's studies show the pair are between 200 million and 300 million years old — young enough to confuse the issue.

Pairs of brown dwarfs are abundant throughout the Milky Way galaxy, but young binaries are not so common, Gagliuffi said. If the siblings turn out to be failed stars, they could provide intriguing insights into their family's formation history.

Binary worlds also are thought to be rare. Our solar system is considered by some to host one pair of planets. The dwarf planet Pluto and its largest moon Charon orbit a point of mass outside the boundaries of each, making Pluto-Charon a binary system. Astronomers have yet to confirm the existence of any binary exoplanets.

The newfound twin worlds drift through what Gagliuffi calls "a whole zoo of different stars," only about 926 million miles (1.49 billion kilometers) apart. While that sounds like an enormous distance — it is 10 times the distance between the Earth and the sun, after all— it's actually extremely close for worlds from two different systems. She and her colleagues think it's unlikely that the pair are just drifting close to one another by chance.

It's possible that the pair is connected to a third, more distant star that they orbit together. No such star has been identified, but many binary systems are actually triples, and Gagliuffi will look for a parent star as she continues this work.

Of course, the pair may also be drifting alone without adult supervision.